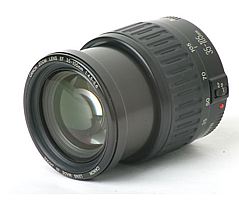 I was just reading a Canon advisory about peripheral AF points operation limitation with certain EF lenses, referring to eight older lenses released between 1990 and 1995. One of the lenses, the 35-105mm zoom, is still hanging around my studio.

Just to be clear, the advisory doesn't say that the lenses don't work with the new Canon bodies. The issue is, "...the peripheral AF points do not function as cross-type AF points resulting in vertical and horizontal lines not being simultaneously detected. Vertical or horizontal lines can only be detected separately."

One of the things I enjoy about my Canon DSLR system is that I'm still using favorite lenses from years ago, such as the 85mm f/1.8, on current bodies, such as the 5D Mark II and the 60D. This particular advisory doesn't bother me much, In fact, I appreciate the information... just in case I decide to break out the 35-105 zoom (which was a mediocre lens at best, btw).

The good news is, that in most cases, you're going to get solid performance with your older Canon EF lenses on any Canon DSLR body. That's why we say that good glass is an investment.