The rustling in the audience grew louder as we approached 20 minutes beyond the scheduled show time at the Paramount Theater in downtown Charlottesville, Virginia. We were waiting for Nan Goldin and Sally Mann to take the stage -- two legendary photographers from an earlier generation. 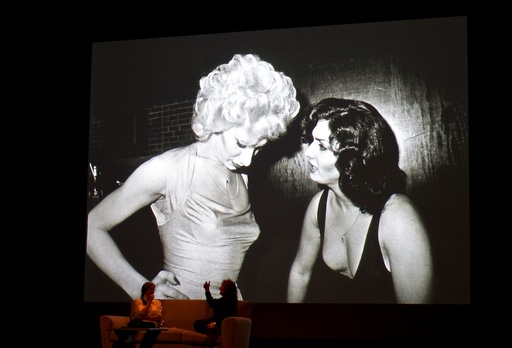 Finally, a voice bellowed over the PA System. Nan has just arrived from Europe. She was scheduled to land yesterday, but she "took a spill" in her apartment, and we weren't sure if she was going to make it here. She caught a later flight and will join us shortly. She hasn't slept for a long time.

More waiting... then, there they were -- sitting on a sofa with images projected overhead.

"I never get out anymore," complains Nan. "I haven't left my apartment in 6 weeks."

"But you live in Paris for godsakes," counters Sally.

"I hate Paris," Nan shoots back.

Yes, the show had begun.

If you not familiar with Nan Goldin, then you have missed a chapter from modern photography history. She lived the life of sex and drugs in the 1970s and 80s, and documented the culture with her camera along the way.

"I never set up shots," she said. She didn't have to. She was there.

When asked about what a particular photograph meant, Nan indicated that the meaning belonged to the viewer. "I would take the picture, then the critics would say what it means."

Nan Goldin was the only speaker at the festival who received a standing ovation. That's saying something since Mary Ellen Mark, Steve McCurry, and other greats had presented earlier.

After the interview, Nan sat at a table surrounded by her Cibachrome prints in the Second Street Gallery and signed copies of The Ballad of Sexual Dependency (1986). Not for 15 minutes or an hour, but she stayed until the last admiring fan had spent time with her. Oh, and the prints looked amazing. Two copies of "The Ballad of Sexual Dependency" waiting to be signed by a fan waiting in line at the Second Street Gallery.

"She's been here the whole time?" I asked.

"Yeah, except for a cigarette break."

Many of us have been yearning to meet Nan Goldin for a long time. On June 11, 2011 in Charlottesville, Virginia, she made sure it was worth the wait.