First Look at Blinq Photo Sharing for Mac and iOS

I was intrigued by a new free photo sharing service called Blinq. In essence, it facilitates seamless image sharing among your computers and iOS devices, even to the point of being able to tap your iPhoto or Aperture library from an iPad or iPhone. Then, beyond that, you can share selected images with friends and via social networking. 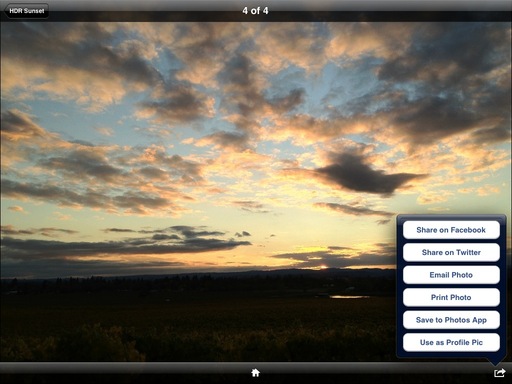 This type of widespread capability usually makes me a bit nervous at first, even if I like the flexibility. But after just a short bit of testing with my Mac, iPhone 4S, and iPad 2, Blinq seems more like a smart facilitator rather than a "grab your stuff" service. The images live on your devices, not their servers.

When you share stuff from an iOS device, a folder is created in your Mac's Pictures folder titled Blinq, and the images are placed inside via dated folders. I made an alias of the Blinq folder and placed it on my Desktop for easy access.

The files are compressed during transfer. The screenshot I used for this article originated on the iPad. If I were to email it to my Mac via the Photos app (the old fashioned way), it arrives as a 1.2 MB PNG file. Sharing the same photo with my Mac via Blinq, it arrives as a 215 MB JPG. Both images look about the same, side by side, even at increased magnification.

If you want to tap your iPhoto or Aperture library via an iOS device, Blinq handles that well, as long as you're using a default library name. If you create custom Aperture Libraries, as I do, Blinq can't see them.

Overall, this service and its apps seems useful for photographers with multiple devices, including Windows machines. They have apps for both platforms. I'll keep testing and keep you posted.