The Golden State Warriors have some of the most entertaining acts during timeouts and halftime. But the best was Saturday night when Ronak Desai, a season ticket holder from Dublin, CA, drained a half court shot to earn himself $10,000. 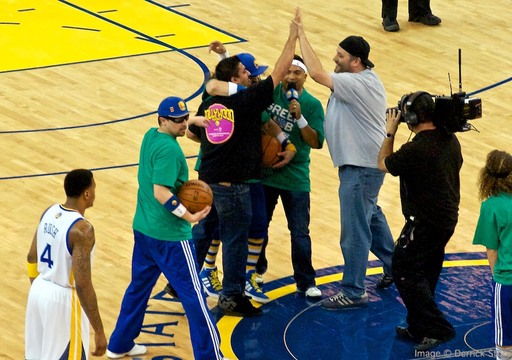 Ronak Desai in the black T-shirt celebrating after draining a half court shot for $10 K.

Ronak actually had three shots that evening. The first, from the free throw line for $500, which he missed. The second, from the 3-point line for $2,000, which he made. And the finale, from half court for $10K. As you can see from the official Warriors video, he hit nothing but net. It was clean.

that barely got by the bag inspectors because it is right at the 3" long limit.

Overall, a great night of action and entertainment. I've posted more shots from the game on my TDS Flickr page.