Know How to Shoot Sharp

A sharp image gives us more detail. And sometimes it's the details that separate a decent shot from a terrific one. So here are a handful of tips to keep in mind to help you sharpen up your shots. 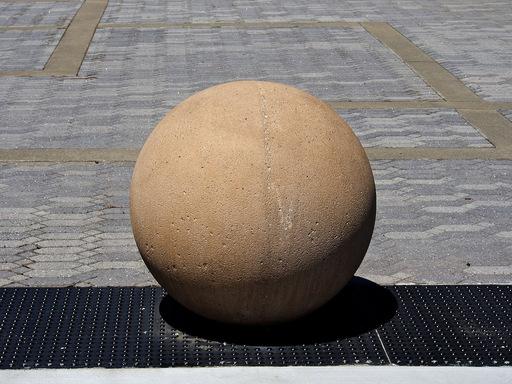 Even a simple shot, such as this sphere, becomes more interesting when you can see the detail in its surface.

Start with the Basics

I read a article at photojojo.com titled, Get Sharp Photos with These Easy Tricks. There's some good stuff there, including bracing yourself against a solid surface during exposure and using various types of tripods. (I didn't agree, however, with their take on post production sharpening. More on that later.) Bottom line here is that good camera technique often leads to crisper images.

Make sure that you're focusing on the most important area of the image, and that it's locked there when you press the shutter button. Pay attention to how you you hold the camera. The one-handed grab shot while leaning out the car window probably won't get you a detailed image. Instead, when possible, use your body as a stable platform for the camera.

Practically every DSLR lens on the planet has been lab tested by an independent source. Those are worth looking at for your glass. Pay attention to the aperture settings that provide the sharpest results. Often it's in the middle of the range, such as f/5.6, 8 and 11. Keep those in mind when detail is an important factor for the image.

Using sharpening in post production can give the illusion of a better focused image, but it doesn't fix the focusing or camera shake problem itself. Basically, most good sharpening filters increase edge contrast at the pixel level. Sharpening is great as a finishing touch, but the real work happens at capture. So make sure you use good camera technique to record a detailed image, then sharpen to taste in post. And when you do, use a high quality filter such as Unsharp Mask, Smart Sharpen, or Edge Sharpen. General rule of thumb is, if the filter just says, "sharpen," stay away from it.

Check your camera settings to make sure you're capturing at the highest quality Jpeg option, or use Raw. You want to hang on to as much image detail as possible when you take the shot.

The quality of the optics attached to the camera makes a difference. Not every lens in your camera bag has to be top-notch pro glass. But it does pay to have one or two razor sharp lenses in your kit for those images that require lots of detail.

Use Sharp Against Soft Technique

By carefully focusing on the object that you want to render with great detail, then opening up the aperture to limit the depth of field, you can create an image that has a sharp object against a "soft" background. By doing so, your foreground image will really pop.

When you want a crisp image, you need to know how to capture it. But every shot doesn't have to be razor sharp. Use the right technique for the photo. Elderly subjects, for example, might appreciate a softer approach to their portraits.