Getting Ready for WWDC 2012

As Apple applies the finishing touches to Moscone West for the World Wide Developers Conference, we can look forward to some important announcements on Monday morning. 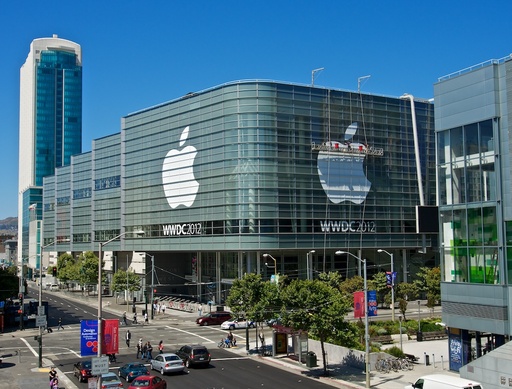 A long view of Moscone West, San Francisco, before WWDC. Photo and video by Derrick Story.

Even though this is a developer conference, Apple uses the spotlight for various types of announcements, both software and otherwise. We know there will be more information about iOS 6 and the upcoming Mac operating system, Mac OS X Mountain Lion.


Final touches to giant Apple logos being applied to Moscone West prior to the WWDC event.

I think we'll also learn more about the evolution of iCloud and how it will be further integrated into the OS and applications. There's a good possibility we'll hear news about hardware too, with a revised Mac Pro in the works. Personally, I would not be surprised by laptop announcements also. New MacBook Pros and MacBook Airs are still fitting for this event, and would add the pizazz that stock holders and the press would love.

So, it's going to be a busy week in San Francisco. With WWDC kicking off on June 11, then the 112th US Golf Open reviving up at the same time out at the Olympic Club, there should be plenty of traffic and a shortage of hotel rooms.

I think I'll follow the action via my MacBook Air, which I hope will soon be revised.