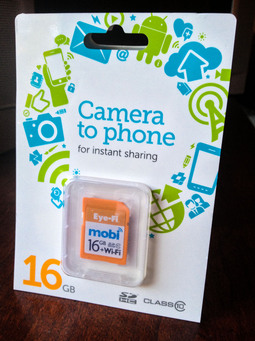 The new Eye-Fi Mobi 16GB SDHC Wireless Memory Card does what I've always wanted an Eye-Fi card to do: easily connect my iOS device to my camera regardless of my location.

Once the card and camera are connected, the images flow from the camera to the iOS device, such as an iPad, where you can edit and share the pictures. The process is relatively simple.

In the Eye-Fi app, you can monitor the connection via the status button in the upper left corner. When it's green, the two devices are talking. When it's red, the Eye-Fi card has timed out and stopped broadcasting. 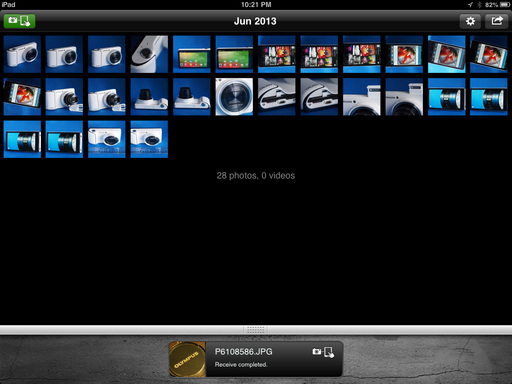 The Eye-Fi app on an iPad mini

This is where the system could use a little refinement. There's no control over how quickly the Eye-Fi card powers down in the camera. As it works out, it's just a couple of minutes. I understand why it does this, to save battery power. But once the card powers down, you have to prod it again to transmit, then go back to Settings on the iPad and log back in to the network.

I would like to have some control over the time period before the card powers down. I found myself having to log in to the card repeatedly, even during a single session of shooting.

Once the images are on the iPad, Eye-Fi creates a Photos Album to manage them. This is very convenient. You can access the Album via the Photos app, iPhoto app, or any other app that can read Albums. I also liked that transfer was swift. My medium-sized Jpegs loaded quickly and were virtually ready for use immediately after capture.

You can set up sharing to Facebook, Twitter, or via email within the Eye-Fi app itself. But since the images are automatically saved to your Camera Roll, you have access to them for publishing using your normal workflow. You can add multiple Eye-Fi Mobi cards to the app, and switch among them as needed. This allows you to have cards in all of your cameras if you wish.

The Eye-Fi Mobi is available in 16 GB ($75) and 8 GB ($50) capacities. Both versions are rated at a speedy Class 10. I anticipate refinements in how we can control the card's power management. But even in this first release, the Mobi is one of the best wireless card options currently available. Both versions are available on Amazon.com