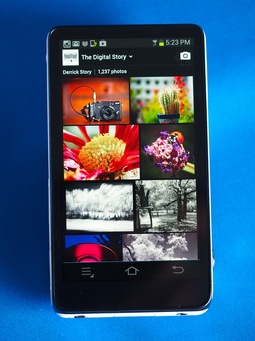 When Yahoo! released Flickr v2 for iOS, iPhone users had a more appealing experience than their Android counterparts. In late May, that discrepancy was diminished... for the most part.

Flickr for Android brings the visual beauty of the iOS version with much, but not all, of its functionality. Since I'm primarily an iOS user, I couldn't tell if the unevenness was my lack of understanding or Flickr's UI. According to others, such as PCMag.com, it's not me; it's the app.

But those few rough spots could be easily ironed out in future updates. And the app itself is beautiful. Like the iOS version, it has reenergized my enthusiasm for mobile Flickr when using Android.

If you haven't done so already, give the new Flickr for Android a try. And while you're at it, join the Digital Story Public Group. We have a talented community there. And selected images from that public group are featured on the TDS Facebook page as the TDS Member Photo of the Day.

If you love mobile photography like I do, then you'll enjoy iPad for Digital Photographers