How to Import Photos from a Samsung Galaxy to a Mac

When you first connect a Samsung Android device to your Mac for photo import, you might be disappointed to see that Aperture and iPhoto are not recognizing the device as a camera. I encountered this problem while working with a Samsung GC110 Galaxy digital camera that uses Android Jellybean for its operating system. 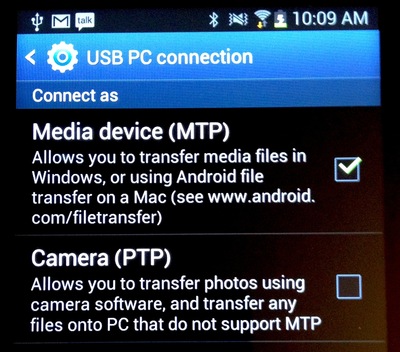 You can easily fix the problem by switching its USB protocol from a Media Device (MTP) to a Camera (PTP). Here are the steps.

If you don't see the "Ongoing" screen in Step 3 when you swipe downward, don't despair. I didn't see it either at first. I downloaded the Samsung Kies software, installed it, then connected my camera with the Kies software running. Then the "Ongoing" option appeared in the Notifications screen on the camera.

As a side note, the Kies software is handy for managing your Samsung device on either a Mac or Windows computer.

PhotoHelpDesk.com is a down-to-earth resource for curious minded photographers. Submit your questions, and we'll post an answer.