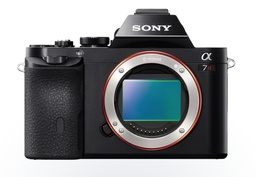 You don't have to be an industry guru to know that the Sony Alpha a7R full frame mirrorless camera is disruptive technology. The feat of bringing large sensor photography to a diminutive camera is impressive.

Now that the a7 and a7R are available, where do we go from here? Do we sell all of our existing gear and jump on the bandwagon? Do all enthusiast photographers really need a full frame camera? I've recently read two excellent articles that help put this disruption into perspective.

Michael Reichmann, whom I met on a shoot in Iceland, published the essay, The Full Frame Myth. He writes:

"But Full Frame has now become a moving target, and Sony has just seriously moved the goal posts - to mix a couple of metaphors. Up until the release of the Sony A7 and A7r in late 2013 it would have been safe to say, or write, that the compromise for Full Frame's higher resolution was larger, bulkier bodies and also larger, heavier lenses. But the new Sonys knock that postulate into a cocked hat. These cameras are in fact as small and as light as some MFT cameras, let alone APS-C models."

Michael manages to put the Sony a7R in perspective while still acknowledging the excellence of other top cameras in the APS-C and Micro Four Thirds format. It's a good piece and worth the time to read it.

I also liked Roger Cicala's A Bit of A7R Sanity. He states, "The camera does some things very well at an excellent price. That will be enough to assure some people will learn how to work around those limitations. In another month or two the screaming will die down and some people will be using the camera regularly and making superb images with it. Because it's fully capable of making superb images. It's never going to work for action photography. It may (or may not) be a great walk around camera. But it will do certain things better than any camera out there at a price that's going to attract a lot of attention."

Roger is very practical in his evaluation of the a7's potential impact on the industry. And both his post and the essay by Michael Reichmann helped me sort out this situation in my head.

I'm one of those guys who doesn't need to shoot full frame all of the time. And when I do, I have my Canon and its arsenal of lenses. The rest of the time, I'm fine with APS-C and Micro Four Thirds sensors. So I don't need to start saving for the Sony a7R.

But your situation may be different. And reading these two articles will hopefully help you sort things out.

PS: the proper labeling of the camera is: Sony a7R.

This Sony a7R has a high Nimbleosity Rating. What does that mean? You can learn about Nimbleosity and more by visiting TheNimblePhotographer.com.