Over the course of the year, our photo libraries tend to become a bit disheveled. As I prepare for 2014, I like to have my 2013 images in shape. One technique that I use regularly is "Merge Projects" that allows me to combine multiple projects into one. 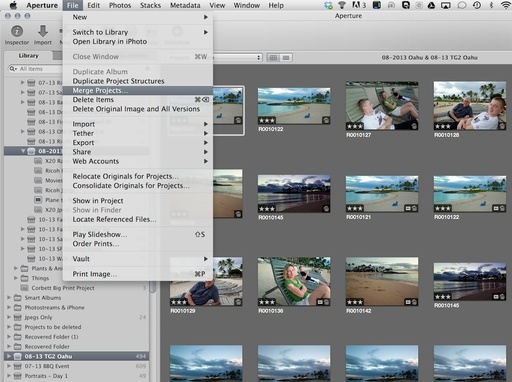 For example, I realized that I had created and backed up multiple projects for my trip to Oahu this summer. In part this was because I had shot with three different cameras.

I was able to combine them easily by selecting the two projects in the Library tab of the Inspector (by holding down the CMD key), then going to File > Merge Projects. Aperture presented me with this confirmation message.

Once I click on the Merge button, Aperture moves the images, albums, and any other parts I've created over to the other project. Typically, the application will move the lower project into the one that's positioned higher in the library. But I don't worry about it either way. Once I'm finished merging, I can rename the project by tapping on its name and typing.

Keep in mind that you can use Folders to organize your projects (File>New>Folder). Just drag the Projects into the new Folder, give it a name, and position it where you want it.

Those of us who are trapped inside by cold weather can put that confinement to good use by getting our photo libraries in order.