OTTO - a Camera Your Can Program with Your iPhone 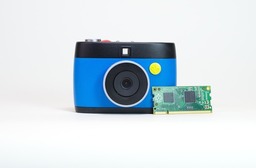 OTTO is an interesting little camera with an unique set of features. Powered by Raspberry Pi, you can customize and even create new shooting modes via WiFi and your mobile device.

Currently, its creators are raising money via its KickStarter program that is open until June 14, 2014. Backers can pledge $199 to receive the first shipment of OTTOs if the project is successfully funded.

Among its talents, OTTO can capture animated Gifs in-camera, time-lapses, stereo images, and really just about anything the mind can conceive. Part of this magic stems from its brains. OTTO is the first product to be powered by the brand new Raspberry Pi Compute Module, a thumb-sized system on module identical to the Raspberry Pi Model B, but in a much smaller package meant to be embedded in products.

If I were teaching a high school photography class, I would probably buy a half dozen of these for exploring and creating new media.