Always Have Your Camera Ready - Dalai Lama Protesters in NY

I felt like it was an escape scene from a James Bond movie.

My assignment was to reach JFK Airport in time to catch my flight to California. But I had to navigate the New York Marathon that was underway and a Dalai Lama protest. My position was the New Yorker Hotel at 34th St. and 8th Ave. In the lobby, I waited on the ready with my two bags: one contained my camera and iPad, the other my clothes.

"Derrick, Derrick!" my name was called. I was whisked to a black 2014 Toyota Camry by a man in chauffeur clothing. He reached for my bags to put them in the trunk. "Not that one," I said pointing to the Lowepro Urban Reporter 150. "It goes in the car with me." 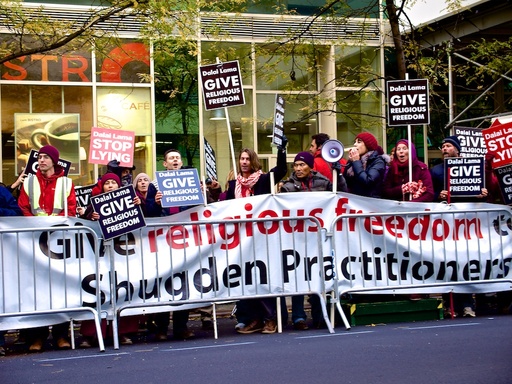 The driver took a shortcut through a parking garage, and when we emerged, we were in the middle of the protest. "So, that's where the noise is coming from," I thought. Agitated participants were on both sides of the street. To my right, supporters of the Dalai Lama. Across the street were those claiming intolerance toward the Shugden Buddhists.

I pulled my Olympus OM-D E-M1 from the camera bag with one hand while powering down the window with the other. I managed to catch three frames before the driver saw an opening and punched the gas. They were in our rearview mirror in seconds.

The moral of the story for me is this: Always have your camera ready. Never let them lock it in the trunk. And, you seldom know what's around the next corner. (And yes, I had returned my settings from the previous "night shoot" back to my default set. So the camera was ready to fire.)

I wrote about the incessant chanting on the Nimble Photographer, titled, The Pounding of the Drum. This was composed in the morning before I knew what was going on, or where, precisely, it was located.

You can learn about Nimbleosity and more by visiting TheNimblePhotographer.com.