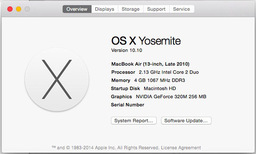 My main computer is a 15" mid-2012 MacBook Pro with Retina Display. It's a heck of a machine that's serving me well.

But I also have a late-2010 MacBook Air that I prefer for traveling. It's more nimble when working on the road. My debate with this machine was whether or not to bring it inline with my main computer and iOS 8 devices.

At first, I decided against this move. My feeling was that Mac OS X Yosemite and Adobe Creative Cloud apps would tax the machine beyond its capabilities. Given a choice, I was opting for perceived performance over compatibility with my computing ecosystem.

After a week in New York with the MB Air running Mavericks and my older software, I changed my mind. Yosemite had spoiled me on the 15" machine. Using Mavericks now seemed like a huge step backwards. I didn't like using the Air anymore. And that is not where I wanted to be. So, I decided to roll the dice. 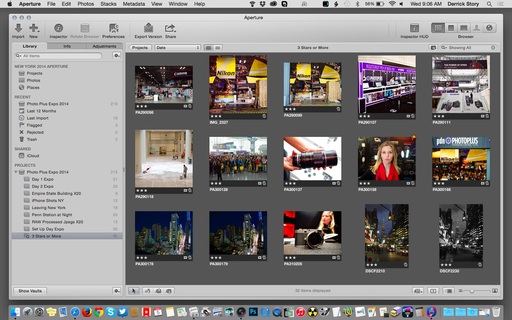 Aperture 3.6 running on Yosemite on a late-2010 MacBook Air.

I installed Mac OS X Yosemite, Adobe Creative Cloud, and updated Aperture, iPhoto, and the suite of iWork apps... then held my breath.

After initial testing, everything is running great. In fact, I like the new environment better. The first thing I noticed is that the screen rendering on the Air is more inline with my other computers. In other words, the pictures look better. This is particularly helpful for image editing.

Next, performance seems on par with what I was used to with this computer. My "go to" photo apps: Aperture, Lightroom, and Photoshop, all seemed fine. Certainly they were not running as fast as they do on the MacBook Pro, but I didn't expect that. What I wanted was compatibility without paying a huge performance price.

At the end of the day, that's what I got. By upgrading the 2010 MacBook Air, I extended the life of this computer. In other words, revitalize. And maybe it will hold me until Apple releases the Retina Display model (which is what I really want!).