We knew there would be some compromise when Apple folded its high-end Aperture and consumer iPhoto applications in to one program. Now that we have an official preview of Photos for OS X, we can see the direction they're heading. 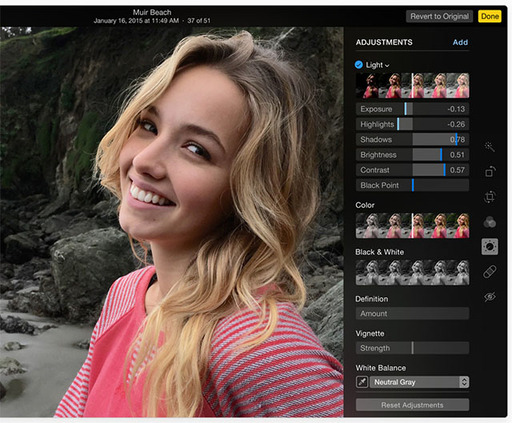 The first thing to keep in mind is that this is the first beta for developer review. We'll see the gold master of Photos for OS X in the spring. So missing items such as star ratings, file names, etc. will probably appear in later releases. In other words, don't interpret what you see now as what you'll have later this year.

We do see some indicators, however, of the direction Apple is taking with Photos. And hardcore Aperture users will surely miss its advanced editing tools. In this area, I would say that early versions of Photos will feel more like iPhoto than Aperture.

My advice is for Aperture photographers to think about a 2-part strategy: what to do for 2015, then 2016 and beyond. For the remainder of this year, we have the luxury of sticking with Aperture on Yosemite and playing with Photos for OS X when it's released. By the end of 2015, we all should have a pretty good idea of how the new software is going to stack up against Aperture.

At the end of 2015, I believe it's decision time. In my case, I'll look at the following possibilities:

For the moment, I find this all very interesting. I'm looking forward to working with Photos for OS X and seeing how far I can push it. In the meantime, the current announcements (in terms of timing) are encouraging. We're going to see this application sooner than later.