The good news is that the Olympus OM-D E-M5 Mark II includes a stereo microphone jack that can be used for an audio input device of your choice. And you can use the External Grip HLD-8G to monitor the input during recording. The bad news is that the interface is somewhat noisy and you may not want to bother. 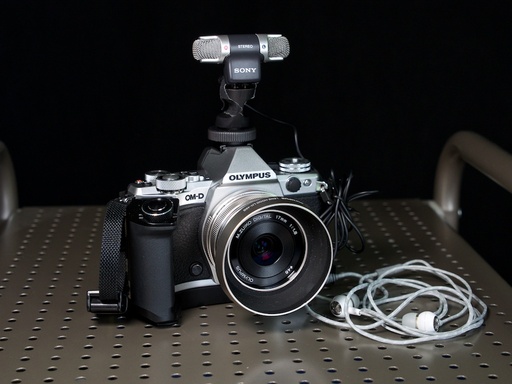 I've done some informal testing using a non-powered Sony stereo mic, a powered Audio Technica clip-on device, and the built-in stereo pickups in the E-M5 Mark II itself. And after running through all of the settings, the built-in mics performed about as well as the external devices. Listen for yourself.

I start out this video using a powered clip-on recording in mono, then switch to the onboard pickups in the E-M5 Mark II. They definitely sound different, but the amount of background hiss was about the same.

This time around I recorded some music and just myself talking. No surprisingly, when capturing the music, background hiss wasn't really a factor. But once again, when it was just me, the hiss was noticeable.

Since the video with the E-M5 Mark II is outstanding, it's worth figuring out the audio. For casual recording, I thought the onboard stereo mics worked nearly as well as low-end external units plugged in to the camera. So I can't think of a compelling reason to bring a separate mic for on-the-go video capture.

The next option is a mic with a 10db boost. These devices often have a narrow recording pattern, so they're not perfect for every situation. But they're well-designed for quick interviews and news reporting. The 10db boost helps compensate for the weak preamps in the camera.

The best audio is going to be recorded with a separate device, such as a Zoom, then substituted for the native audio in post production. For critical use, this is still the preferred method. Not everyone, however, wants to spend the extra time in editing. Just like everything else in photography, you have to figure out your priorities and go from there.

After listening to the samples, what do your ears hear?

The Olympus OM-D E-M5 Mark II has a high Nimbleosity Rating. What does that mean? You can learn about Nimbleosity and more by visiting TheNimblePhotographer.com.