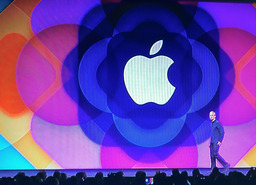 The focus of WWDC news during the keynote at San Francisco focused on Mac OS X, iOS, Watch OS, and Apple Music. There were a few tidbits for photographers. Here are the highlights for shooters.

The next version of Mac OS X will be called El Capitan. The flagship feature is side by side windows, which allows us to split the screen in two, then work on each half. Split view is great for managing photos with other documents.

iOS 9 features an improved Siri that will let you ask questions such as, "Show me my photos from Hawaii last July." The images are fetched and displayed on your screen. The Notes app will be enhanced in many ways, including easily adding pictures from the device to a note, without having to leave the app. Photo Mosaics will be incorporated into the new News app. Images from articles will be displayed artistically.

"iOS 9 will elevate the iPad to a whole new user experience."

Multitasking is the headliner for iOS 9 on the iPad. This allows multitasking with multiple apps, even in a split view on the device. To fully utilize all of the features, such as full split view, you'll need an iPad Air 2. Most of the other less processor intensive goodies will work on other models. The Public Beta will be available in July.

A new "Photos Face" will be available that lets you select a single image, or pictures collected from an album, and use them as the background on your watch. For a single image, display it on the watch face, apply force touch, the choose "Use as watch display."

It's not photography related, but Apple Music was the "One More Thing" announcement. It will be a comprehensive music ecosystem, that uses your music and the content available online to create a personalized experience. Artists can, additionally, add photos and commentary via Connect in Apple Music.

There wasn't much news for photographers during today's keynote. Music lovers, yes. But for shooters the enhancements were subtle at best.

And if you scroll down a ways on the El Capitan Preview Notes, you'll see two notable items: