One of the advantages to being Derrick's assistant is that I get to shoot at photo workshops right alongside the participants. As a result, I've discovered some new techniques, one of which I want to share with you today. 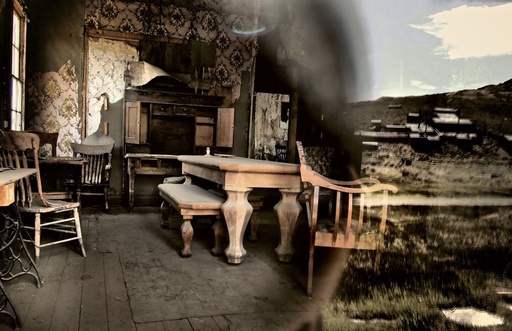 This image is from the Eastern Sierra workshop this past June. Day one of the event, we drove out to the old ghost town of Bodie. This place is a photographer's dream, set in an isolated, rural area with buildings and roads forgotten by time. It puts the imagination in high gear, to walk among the remains of an old western town.

We got there at 9 o'clock in the morning, and the sun kept climbing higher in the mostly-cloudless sky. At first I just shot everything I saw, because heck, I was in Bodie! Everything looked fantastic. Every direction I faced there was something to be photographed. I was surrounded by the wild west.

But once I got all that excitement out of my system, I began to curse the harsh midday lighting, the flat sky, and even the other tourists who seemed to be everywhere that I wanted to photograph. I started shooting through the windows, into the abandoned homes and buildings (the public could enter only a few structures). I liked the shots I was getting, but I wanted to be more creative.

I had been using my camera lens placed against the glass to peer into the buildings and take photos. As I started playing around with this technique, tilting the camera to one side or the other, I discovered a new effect.

Where the lens produced shade, I could see inside the home. But on the other side of the frame, the dust-coated windows reflected the ghost town behind me. When I pulled the lens very slightly away from the window, I got a blurred edge, which looked like the two worlds were just barely meeting.

Once I did this a few times, I became enamored with the style, and I ended up with a bunch of shots that I love. What I liked about it was the fact that the very conditions that originally made photography difficult - namely the flat, harsh lighting - were the ones that actually helped me get those strong reflections leading to photos that were quite interesting. In other words, the bad lighting forced me to shoot more creatively.

When I show these photos to others, several comment on the editing between two subjects. I have to correct them: "Actually... this isn't a compilation of images sewn together in Photoshop; this is one image." The only editing I'd done, was with coloring and tone.

The fun part about it is the lack of technology involved, the simplicity of it, and the ability to create art because of undesirable conditions. Had the sky been filled with clouds, or a beautiful sunset, I may not have gotten the images I did, the ones I love, the ones which suggest stories of another world in that old, forgotten place.