A Little Talk Goes a Long Way on the Street

Photographers debate about how to take pictures of the disenfranchised on the street. The way that I look at it, is that there are some situations where I want the shot, and many that I don't. And for those that I do, I've found that a little conversation goes a long way. 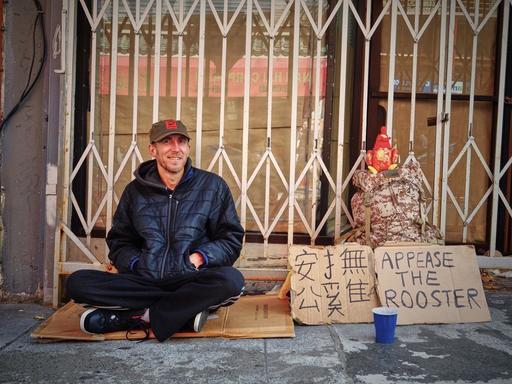 I tend to be attracted by clever signs. I thought that this image, for example, would make a good photograph. So I introduced myself, asked to take the picture, then put a few dollars in the cup to appease the rooster.

I've found that a lot of chatter isn't required, or even wanted by the subject. My real goal is acknowledgement and respect. Once I've conveyed that, I go about my business and let him go about his. And the interactions tend to go quite well.

In all honesty, we're all just trying to get by. The metaphor that we used in the workshop was that the street is a big aquarium, and we're all part of it. On this particular day, Larry was a bit more colorful than me. And I'm happy that he let me capture that.