How many times have you held back a shot because you thought it was too cliche? Or maybe it featured what we call a mature subject, such as a sunset or the Golden Gate Bridge. But, maybe, just maybe, it's more artistic than you realize. And it's even possible that both photographers and the general public would admire it. That's what I call the crossover shot. And it's the first topic for today's show. 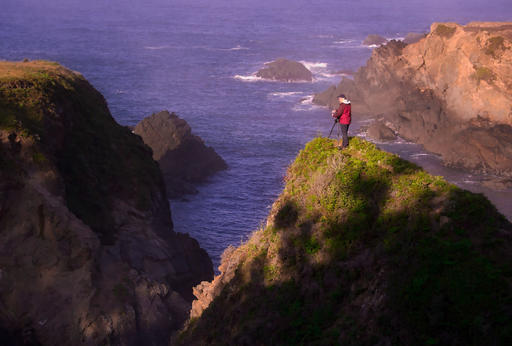 I want to start by telling you a story that happened just a few days ago. Seven of us were reviewing 3 days worth of pictures that we had captured on the Northern Sonoma Coast. This is postcard territory for sure, and one of the biggest internal struggles group members were having was choosing eight original images for the final class presentation.

Among the various subjects, everyone had a sunset shot. Yet, not one of those dazzling twilight images made it into the final presentation. And afterwards, as we talked about our choices, each photographer felt that it was either too cliche or that someone else would present theirs. So no-one did.

This gave me the opportunity to talk about the crossover shot. Images that appeal to both the hardened photographer as well as the Mom with loving eyes. And from that discussion, I have five key points to share with you today.

A Remote Trigger As Well

In order to accurately measure the flash output on your subject, you want to measuring from that position. So how do our trigger the flashes?

These modules provide multiple zones, flash power control (except for Phoenix), and model light control (except for Phoenix). And since this is a radio system, you can stand just about anywhere, inside or out, to trigger the flashes and take a reading. The Speedmaster also provides the old school PC terminal connector for those who use wired systems as well. And if you don't want to mess with any of that, there's a tripod socket in the bottom of the unit, so you can mount it on a stand.

If you want to learn more about the Sekonic Speedmaster L-858D-U handheld light meter, visit the link in these show notes.

Here are some of my favorites from the TDS Facebook comments on last week's podcast.

Mark: Yup, I've done the 'Went out with a spare discharged battery', and I can add one 'Formatted the wrong card' (fortunately without erasing any good images that mattered!).

Carl: Realizing half way through a shoot that the only memory card I have is nearly full because I failed to format it. Now that I think about it this is two stupid mistakes.

Richard: I often leave the house with just a camera and lens...and no memory card. Then I'm just carrying jewelry.

Rob: My doh moments: camera still in bracketing mode from the day before, and I wonder what is wonky with the exposures.

Jim: I routinely found myself with a bag of discharged batteries. Now when I charge a battery I wrap an elastic band around it. Now the discharged ones are easily identifiable because they are the ones in my bag with no elastic on them. It also has a side benefit in that it prevents anything in the camera bag from shorting the terminals.

Jerry (from our recent workshop): Yes, I put my batteries in their chargers on the power strip before I went to bed. Problem was, the switch on the power strip was off. So I was looking at a day of exciting workshop shooting with a batch of dead batteries.

lynda.com and LinkedIn Learning have just released Capture One Pro 10 Essential Training. And I talk about this title, and those related to it, during this segment of today's show.

Big thanks to all of our Patreon members! I was able to pay for the podcast server and the backup system from last month's pledges. Your contributions are making a positive impact.

Registration invitations have gone out to Reserve List members for the Autumn in Wine Country Photography Workshop. If you are on the Reserve List, but didn't get your invite, please contact me. You can learn more about the workshops by visiting the TDS Workshops Page.