Dogs are attached to their masters and cats connect with their homes. For Dibs the studio cat, she's going to have to think more like a dog for a while. 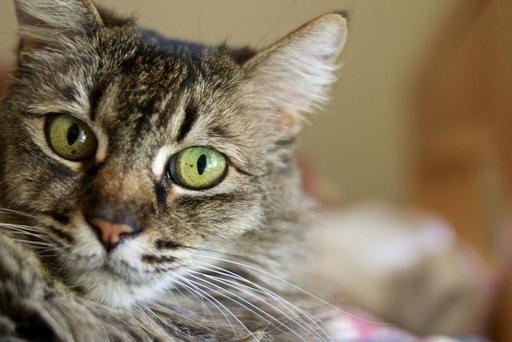 Dibs is on the road with us as we continue to stay one step ahead of the fires in Santa Rosa. We picked her up at the studio 1am Monday morning when we had to leave our house, thinking that my workplace in the middle of Santa Rosa would be safe. She was there waiting for us. That's her home.

An hour after we set up shop at the studio, we were notified that we had to evacuate again, and that included the cat. She hates traveling. Every car ride equates to a trip to the vet. But there was no negotiating this journey, and she seemed to know it. She sat quietly while we worked through traffic again in search of our next safe zone.

Our second stop was Theresa's Dad's place in Bennett Valley. It was up on a hill where we could see the fires down below. We all spent a night there, until another evacuation notice arrived the next afternoon. A separate fire, the Nunsvalley blaze was approaching from the east.

This evacuation was mind-numbingly slow. There are few routes out of Bennett Valley, and everyone got the notice at the same time. Once again, Dibs was riding shotgun in my car. By this point we had a caravan of family as well: Theresa, her dad, her older brother and sister in law (who had already lost their home), and her younger brother. This time we were heading to Forestville. There was enough room for us at a rustic cabin. We all found a place to sleep.

Dibs is starting to get the hang of this travel thing. Now, once introduced to her new accommodations, she calmly surveyed the scene, then looked a me as if to say, "OK, this will do."

I never thought that Dibs would become a road warrior. But she's evolved into a "have litter box will travel" kind of cat. I'm happy to have her with us. No band of gypsies is complete without a kitty or two.

PS: She may be packing her kibble again. We just heard a fire flared up West of Santa Rosa.