When the Panasonic Lumix DC-TS7 was released, it reopened the debate for which rugged compact I would pack for my outdoor adventures. Would the TS7 dethrone my current favorite, the Olympus Tough TG-5? 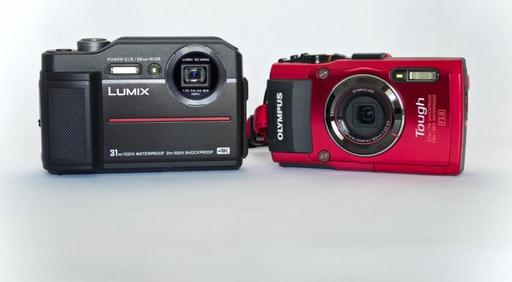 Side by Side - Panasonic TS7 on the left with the Olympus Tough on the right.

Here's what tempted me with the Panasonic TS7:

With the Panasonic, I would get more resolution (20MP vs 12MP), greater zooming range (28-128mm vs 28-100mm), an electronic viewfinder, and a higher resolution LCD back screen. Both cameras have 4K video recording, but the Panasonic has the 4K Photo mode. 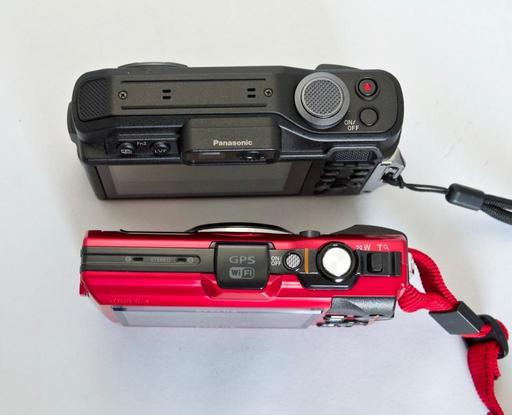 So I carried the TS7 around with me for a couple weeks of summer activity. The Jpegs still images were very good. (But, I was surprised that I did not have a RAW option like I do on the Olympus Tough.) I particularly liked the the burst mode in 4K Photo. In this mode I could capture at 30fps, then choose the frame that I wanted for the still image at 8MP resolution. This was my favorite feature on the Panasonic. It's fun and effective. 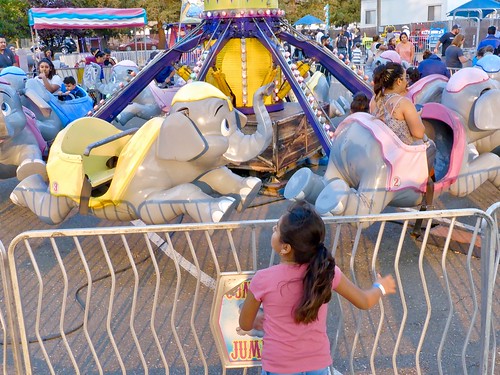 I was also looking forward to the 4K video capture. But I had a difficult time focusing. Once I started the video recording, the camera seemed to have a mind of its own in terms of choosing focus point. This could be due to my lack of experience with the device. But even when I sat down and tried to figure it out, I still walked away with clips that were not sharp. This was my most disappointing feature with the TS7. 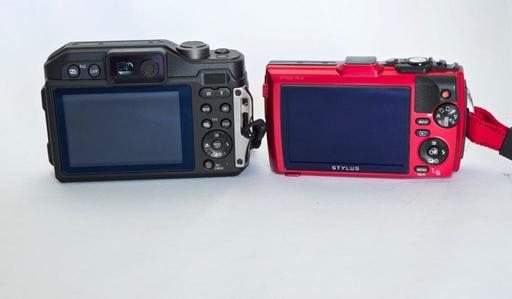 The electronic viewfinder is visible on the black TS7. The Olympus doesn't have that feature. Instead, the GPS module sits atop the camera.

The built-in electronic viewfinder was a welcome addition. I didn't use it as much, however, as I thought I would. In part, that was because the high resolution LCD was quite good and convenient. Also, the EVF is a bit small and not that enjoyable for composing. So for me, the electronic viewfinder is in the category of nice to have when I need it, but not much beyond that.

So what's the bottom line here? Am I going to switch from the Olympus to the Panasonic for my adventure compact? No, I'm not. Here's why.

Both cameras are tough and waterproof. So I can take either anywhere. But with the Olympus, I get RAW format, realtime GPS geotagging, smaller form factor, and a faster maximum aperture. Plus, the TG-5 is $379, $60 less than the TS7.

There were definitely things that I liked about the Panasonic TS7. I like its handsome good looks, viewing options, and the wonderful 4K Photo mode. But I struggled with its video capture, and I do miss having RAW for hard-to-tame contrasty lighting - something that I seem to encounter often during summer adventures.

Also, the built-in geotagging that the Olympus provides is top notch. I don't have to do anything, and the location data is added to my shots. The Panasonic has a feature that lets you add tags via your smartphone. It's not the same by any means.

So, would I discourage someone from choosing the Panasonic Lumix DC-TS7? Absolutely not. It's a good camera that has a lot going for it. It's just not my favorite of the two.