As I was driving south on Highway 101 to the studio this morning, I noticed an interesting scene to the west. Two hot air balloons were down in a vineyard. One was up and looking ready to launch. The other wasn't faring as well. 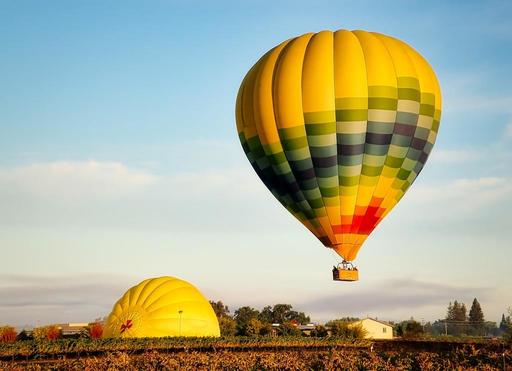 Fortunately, I could exit on River Road and drive over there for a closer look. What a beautiful scene. The warm colors of morning light combined with the balloons and vineyards. I could see the costal fog bank in the distance with a few additional wisps in the sky.

I parked the car by the side of the road and tromped out into the vineyard, shooting along the way. I reached for the Olympus PEN-F, which had the Panasonic 20mm f/1.7 on it. There was no time to change lenses. One thing I know about hot air balloons is that if you look away for just a second, it's easy to miss the shot.

Sure enough, as I was walking toward the scene, the first balloon began to lift off. I was shooting RAW+Jpeg, so I knew I could enable the doubler to frame the shot tighter. I love this feature on Olympus cameras. The 2X digital tele-converter is very high quality, especially when your Jpegs are set to Super Fine.

I also recorded a few frames with my iPhone X for the geotags. Those shots are nice, but the don't have the same presence as the one captured with the PEN-F. Yes, smartphones are capable picture-takers. But I was really happy that I had a real camera with me this morning.