Nikon is celebrating 60 years of the Nikon F, which was released in 1959 to overcome technical obstacles inherent in the rangefinder design. At that time, the F wasn't designated as a professional camera. But that soon changed. And the events that fueled its evolution are the subject of today's TDS podcast. 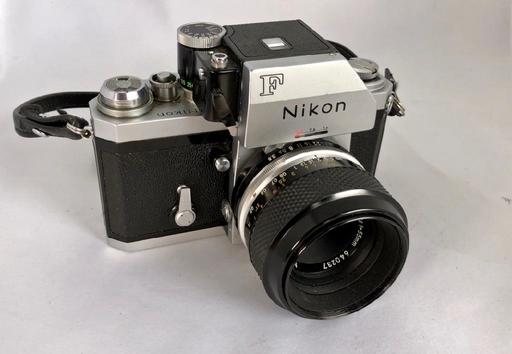 Anyone who has ever pressed the shutter button and wound the film advance on an analog Nikon camera, knows that they were a marvel of mechanical design. And that's one of things that always stood out for me with those early Nikons, was attention to detail.

To help illustrate this point, here is a common scenario for me. I will purchase some forgotten Nikon that had been sitting in someone's garage for decades. On the outside, it will be covered in layers of fine grime that had settled on it over the years. It probably endured extreme temperatures as well.

More often than not, after a through cleaning of the exterior, and replacing the rubber seals in the back, the camera will fire up, take a picture, and wind with the precision of a finely designed machine. How many of today's cameras would fare as well under those conditions?

There are definite milestones to the evolution of the Nikon SLR and DSLR. For today's show, I'm choosing five of them that I think make Nikon, Nikon.

Other fun facts include that the iconic red line made its debut in 1980 with the Nikon F3. In 1992, Nikon released the NIKONOS RS, the first underwater SLR with autofocus. And in 2004, the company releases the Nikon F6, which was to be the final installment in their highly popular flagship Nikon F-series line. The F6 combines the well-loved features of the previous Nikon F cameras and the latest technological advances during this time. Source: Nikon Rumors.

The release of the F6 marks the end of an era, but Nikon does not slow down, with subsequent milestones including the first camera with WiFi, first DSLR with video capture, and back to space with the International Space Station.

But after all of this, what still makes Nikon to me is a company that's priority is making cameras, lenses, and the accessories for them. Their optical expertise expands to microscopes, surveying equipment, and scanners. And they don't stray far from products that don't include lenses.

Regardless of which camera brand you favor and shoot with, chances are good that Nikon technologies have in some part influenced them. And their 60 year run with the F Mount has been good for all of photography.

This is an excerpt from an article published on The Daily Mail.

A group of wedding photographers have revealed the relationship 'red flags' they have noticed at ceremonies over the years that ultimately signaled a 'doomed' marriage. The photographers formed Reddit thread to explain how various simple moments at weddings ultimately spelled the start of a marriage breakdown.From smashing cake into one another's faces to fighting on the day of their nuptials, these were the tell-tale signs they could all agree on.

Our grand finale of the season will be on Sept. 18-20 in one of the most beautiful areas on the planet. Our headquarters will be in Fortuna, CA - an easy drive from the Eureka Airport only 25 minutes away.

We're located on the Eel River, and situated perfectly to explore the Redwoods just south of us. This will be an excellent event to cool off, slow down, and get some great images. Plus, you'll be able to spend some quality time with your fellow virtual camera club members.

We still have a couple openings on the reserve list. You can secure your seat by visiting TheNimblePhotographer.com, and place a fully refundable deposit for the event.

B&H and Amazon tiles on www.thedigitalstory. If you click on them first, you're helping to support this podcast. And speaking of supporting this show, and big thanks to our Patreon Inner Circle members:

Portfoliobox - Your PortfolioBox site is the best way to show off your best images.