Skylum is putting the finishing touches on its next major release of Luminar 4, and one of the highlights will be AI Sky Replacement. 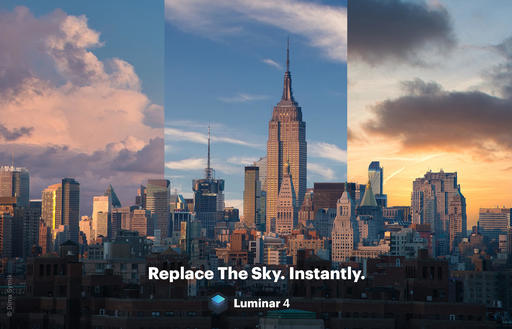 AI Sky Replacement works by automatically detecting not only the sky, but also objects in a photograph's scene. This helps make sure the photo ends up being as realistic as possible once you insert a new sky. It removes things like halos, artifacts and edges of transitions, problems that often were present in existing sky replacement techniques. With the AI Sky Replacement you will also be able to adjust the sky to fit the rest of an image -- things like depth of field, tone, exposure and color -- making it great for not only landscapes, but also portraits.

When working on an image, the AI Sky Replacement technology automatically creates a mask for the sky, taking a step that would oftentimes take minutes or even hours, and boiling it down to mere seconds with just the click of a mouse. But that's not all it does -- AI Sky Replacement also correctly detects the horizon line and the orientation of the sky to replace so that it looks as realistic as possible.

Furthermore, with the scene relight technology, you'll see the rest of your photo change in terms of light and color when you select your sky of choice. This makes sure that an image and sky match so they appear they were taken during the same conditions. Because of the toning that AI Sky Replacement does to an image, it looks as natural and smooth as possible.

Luminar 4 is scheduled to be released this Fall. But you can preorder now at a substantial discount, plus get it a week early. This should be a powerful release of an already impressive creative tool.