There is something truly exciting about a prime lens with a big hunk of objective glass encased in a smooth functioning all-metal design. And the heart beats even faster upon discovering that such lens can be purchased for $249. Let me introduce you to the Kamlan 50mm f/1.1 Mark II. 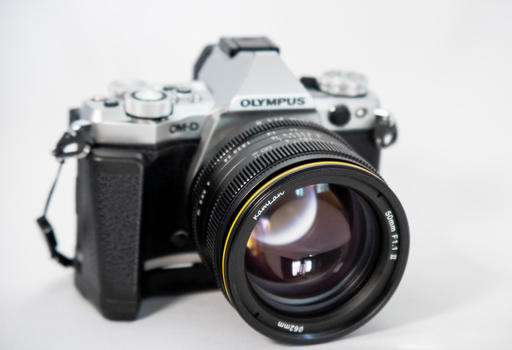 I purchased the optic on Kickstarter for $199 with metal lens hood and 62mm ND4 filter. It's now showing up on on Amazon for $249 (without the ND filter), and I'm sure we will see it plenty of other places. I've been shooting with it on my OM-D E-M5 Mark II, and I can tell you, this lens is the real deal.

One important thing to note if you start shopping around for the Kamlan 50mm, is to make sure you're purchasing the Mark II, which should cost you around $249. There are still plenty of Mark I versions floating around online. They cost less, about $175, but they are not optically as good as the Mark II. 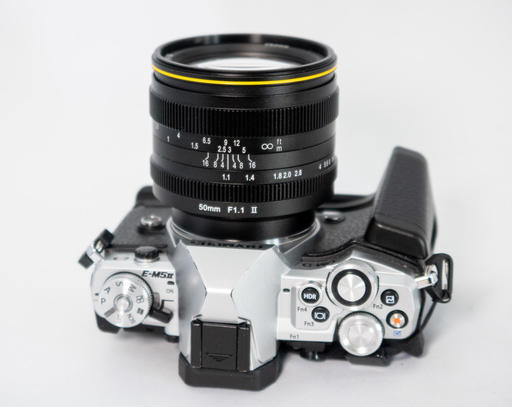 It's designed with 8 elements in 7 groups, 11 aperture blades that form a beautiful circular opening, weighs about 600 grams, and is available in Micro Four Thirds, Sony E, Fuji XF, and Canon EOS-M mounts.

The manual focusing in well-dampened and a pleasure to use. The "clickless" aperture ring turns smoothly allowing for "aperture racking" in video work. The outstanding metal lens hood is cleverly designed to screw into the outer edge of the lens allowing for filters to be mounted separately with the inner threads that are 62mm. And yes, the lens hood reverses, making this already relatively compact wide aperture telephoto very portable. 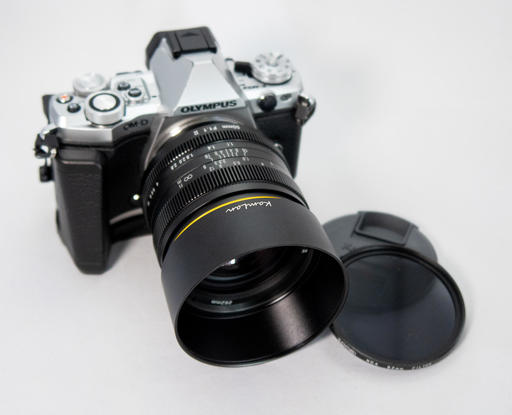 To take full advantage of its optical design, I recommend setting the aperture between f/1.1 and f/4.0. Center sharpness is good at f/1.1 and overall sharpness from corner to corner is terrific by f/4. There's really no need to stop down more than that. 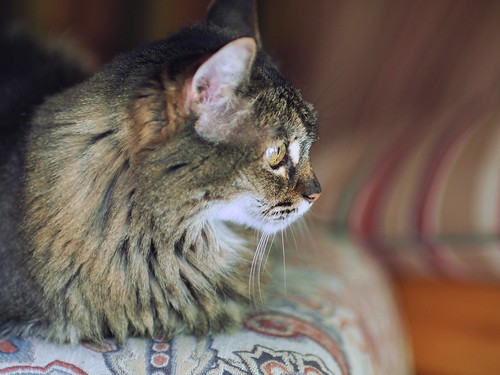 At wide apertures, depth of field falls off quickly, even with the smaller Micro Four Thirds sensor. Dibs was sitting on an ottoman that was right next to the futon. Both the back of the ottoman and the futon are dreamily rendered in the image. Center sharpness is quite good.

The biggest challenge with the lens is accurately focusing with an electronic viewfinder that isn't really designed for this type of optic. I switched to the PEN-F to see what the difference would be compared to the E-M5 II.

On the plus side, the superior EVF on the PEN-F made focusing much easier. Also, the Lens Info function allowed me to set up metadata for the Kamlan that would appear in the EXIF. On the downside, the lens doesn't balance as well on the PEN-F as it does on the E-M5 or the E-M1. That being said, I love the results that I get with the Kamlan on the PEN-F. 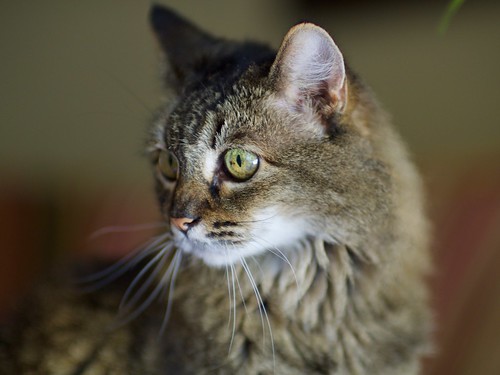 One thing to keep an eye on with this lens is the aperture changing without your noticing right away. You won't get any indication in the viewfinder (other than the shutter speed adjusting). But being a clickless aperture ring means that you can accidentally turn it while focusing if you misgrip. This wasn't a huge problem for me, but I did shoot some images at f/1.2 and f/1.4 without realizing that I had stopped down a bit.

The weight is going to bother some more than others. On one hand, the metal design feels like a quality optic designed by a premium manufacturer. The heft has a certain confidence about it. On the other hand, we are talking about 600 grams. So if you're super nimble, this might feel just too darn heavy.

And finally, do use that lovely lens hood in bright conditions, because the lens will flare a bit with the sun shining on it. If you're going for that, you'll have a blast. But if you want to retain the excellent contrast and color that normally comes with this optic, use the lens hood.

None of these cautions dampened my enthusiasm for this bokeh beast. I appreciate the quality build, smooth focusing, handsome design, and best of all, the images themselves. I've always liked the 100mm focal length, and I'm so pleased to have it for my MFT cameras.

The bottom line is that the Kamlan 50mm f/1.1 Mark II is an excellent value for those who enjoy wide aperture photography. And for those of us who shoot Micro Four Thirds, it is a real gift. Highly recommended.