To Keep or Not to Keep? What to Do with Rejects from Big Photo Shoots

A big photo shoot with hundreds, if not thousands of RAW files can stress your photo management workflow. If it's an event where I need to use burst mode for recording the action, my deliverables are about 200 files for every 1,000 captured. So what to do with the other 800? 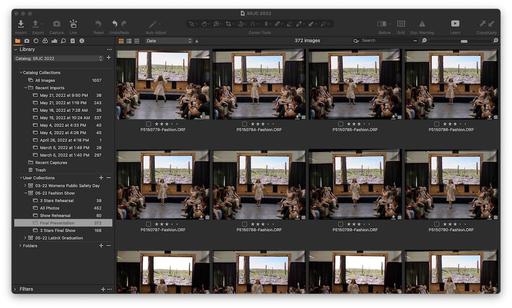 These days, most of the rejects don't even make it on to my computer. When Capture One Pro introduced the Import Browser, that allowed me to begin culling at the first step of the workflow. Instead of simply downloading everything from the memory card on to the computer, I make an initial Yay/Nay pass and separate the wheat from the chaff with the Import Browser.

Yes, it takes more time on the front end, but I have fewer large RAW files to manage on my computer, easing the strain on my internal drives and backups. (If you're not familiar with the Import Browser, here's a short piece on how it works.)

Generally speaking, I'm now only importing about half the shots from the memory card thanks to culling out losers during import using the browser. The second step is to add star ratings to the images that do make the cut.

I've found it easier to accurately rate pictures during this step because I've already seen everything once, and I have a feel for the overall shoot. This is the point where I whittle down the deliverables from 500 to about 200. (I keep all 500, but the 200 that go to the client now get their own album in the photo management software.)

Only Adjusting the Remaining Survivers

I go through those survivors one more time for cropping, exposure, and color adjustments. I then export the finals out of Capture One and send them to the client. The entire 500 images are also backed up using my normal archiving process.

What to do with the Rejects?

The only remaining question is: what to do with the files that are on the memory card that never made it to the computer? For me, the answer depends on how I captured them in the first place.

If it was an action shoot where I was using burst mode and have sequences where I've culled out the keepers from any given burst, I'm ok with letting the rejects go. I've already backed up half of the shots, and only a percentage of those were deliverables.

I have a harder time deciding what to do with single frame shoots. In those situations, it's not a burst of a dozen images, but rather a frame by frame capture with each image its own unique picture.

For those shoots, I'm dumping the entire memory card on a large backup hard drive, just in case I ever have to go back through them to look for a particular shot. I may never open those folders again, but there's some peace of mind knowing that I could if needed.

Regardless of how I decide to handle the rejects, I don't format the memory cards until I've secured at least one backup of the images that did make it into my photo management system.

The real point here is this: You may not necessarily need to archive every frame you shoot. That can really add up over time, especially if you shoot RAW with a high resolution camera. And how often are you tapping those archives anyway?

Put some thought into a plan that you can live with, considering the variables that come with different types of shoots. Hopefully you'll find a sweet spot that balances common sense with the price of storage.