Backing up your pictures is much easier when you know where they all are. But as I've discovered over the years of teaching photography, students aren't always sure about the locations of their images. Verbatim might be able to help. Their PhotoSave DVDs are preloaded with Windows software that scours your hard drive, finds all of the pictures on it, then gives you the option of burning the entire collection on to one or more DVDs -- depending on how many photos we're talking about. This could be particularly handy if you're about to wipe Mom's PC hard drive and want to make sure you don't lose any stray pictures in the process. 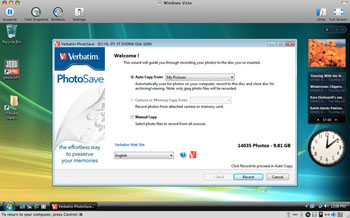 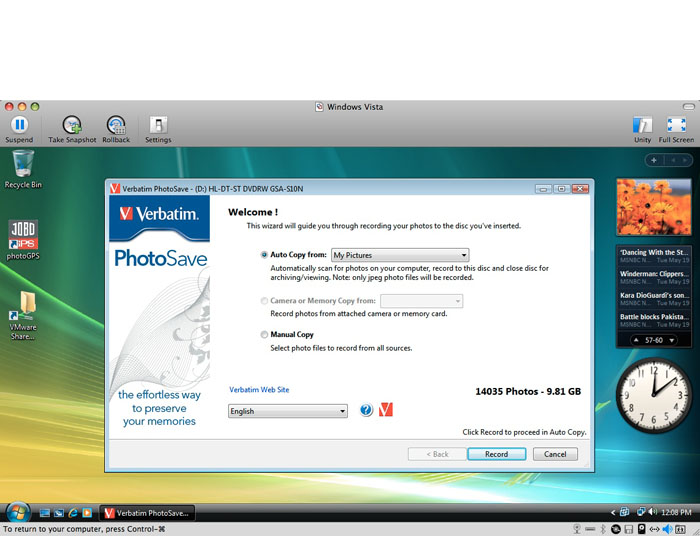 Since PhotoSave is Windows only, Mac users have to run VMware Fusion or a comparable virtual machine to use PhotoSave. But you can do that. I tried it on a MacBook running Vista, and it worked.

After you insert the PhotoSave disc, its built-in software launches and you have the option of automatically scanning your hard drive for photos, reading images off an attached memory card, or manually picking the folders you want backed up. Since you can manually burn images with any writable DVD (that costs less than $3 each), that doesn't seem like the best use for this product, so I imagine most folks with choose to have PhotoSave autoscan their computer or a large directory.

If you have more pictures than will fit on a single disc, PhotoSave will burn to multiple discs for you. Once you put it in motion, it seems to work fairly quickly gathering the images and placing them on the disc in their originally named folders.

Once the disc is burned, it is recognizable by both Windows and Mac computers (running Leopard) -- although very slow on a Mac. On my MacBook, it shows up with the burn date as the name of the disc, and inside are my file folders full of pictures. I was able to browse the DVD using Adobe Bridge 5. But this requires patience since DVDs read much slower than hard drives. And it seemed to me there was extra work involved creating the thumbnails than with a standard DVD full of photos. Nontheless, it did work. On Windows, the experience was more pleasant.

I could see using Verbatim PhotoSave DVDs for special situations, such as backing up images from an unorganized amateur photographer who had hundreds of photos, but not thousands. But impatient photographers who have lots of big images should stick to hard drives and other speedier backup systems. And even though you can use a Mac, I would say that PhotoSave DVDs are best left to Windows computers (unless you have *a lot* of time on your hands). Verbatim PhotoSave DVDs are available on Amazon.com for $15.64 for a five pack.

I suppose I'm gonna need to look up a couple more things but this is a really good strting point.