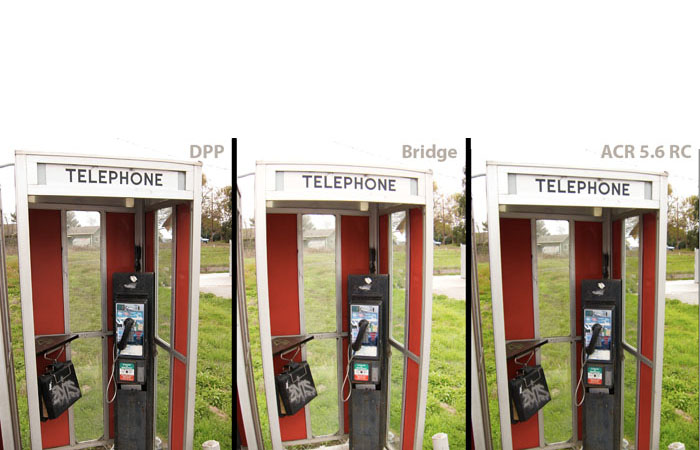 Raw processing: it's harder than it looks. I was thrilled to see that Adobe has released Adobe Camera Raw 5.6, Lightroom 2.6 Release Candidates that supports 19 new Raw profiles, including for the Canon PowerShot S90. I like using the Bridge/ACR workflow for quick turnaround jobs, and being able to bring the S90 into that flow is terrific news.

Comparison of an S90 raw file processed in Canon's Digital Photo Professional (left) and ACR 5.6 RC (right). The Bridge preview (middle) shows just how much work the two processors do before you ever move a slider. You can see full size versions on the Digital Story Flickr page. (Click to enlarge).

But Raw processing often includes more than just getting the exposure and color right. In the case of the S90, it also has to correct for distortion and handle other important aspects of making the picture look good. I had already processed Raw files using Canon's own Digital Photo Professional, and the images shaped up nicely. How would the Adobe ACR 5.6 Release Candidate stack up?

As it turns out, quite well. I've included an S90 shot here that was captured at the wide end of the lens (7.5 mm, or about 35mm in standard terms). There was quite a bit of distortion as you can see in the uncorrected version that I previewed in Bridge (middle). But when I opened the picture in ACR 5.6 RC (right), you can see that much of the distortion was corrected. Wow! I expected DPP to do that (left), but was crossing my fingers that ACR was up to the task as well. And it is.

You can see bigger versions of all three images on the Digital Story Flickr page. You'll notice that ACR does interpret the file differently than DPP. I used the "Standard" profile for DPP, and the "Camera Standard" profile in ACR. I tried to add the same amount of sharpening in ACR that DPP automatically adds, but didn't make any other adjustments in either application. I then took a high resolution, 100 percent, screenshot of each of the processed previews.

I like the interpretations by both DPP and ACR. I give the initial processing nod to DPP, but have better tools for adjustment in ACR. Compare either to the preview in Bridge, and you'll see just how excellent they both are.

For my own work, I'll probably use ACR 5.6 or Lightroom 2.6 most of the time for the Canon S90. But for certain images, I won't hesitate to open them up in Digital Photo Professional to see how Canon renders the file. Options are good, and we have two excellent ones here.

Thanks for your series on the S90 Derek, just got one last week, love it. I traded up/down/sideways from a G10 and glad I did...the S90 so much easier to carry around, and like you I've been really pleased with the improvements in the ISO 400-800 area, which was my primary reason for selling my G10.

Of course, as an Aperture user I can't do a thing with the S90's RAW files, and if their past history is to be any indicator, it'll be months before I can. Meanwhile ACR and LR3 are S90-ready today. As much as I hate the thought, it may be time to start the migration to LR - for this reason an all the others where Aperture is lagging behind LR. But that's a whole other topic.....

I agree, Nelson, that the S90 is a keeper. I think Canon did a great job with that camera, and the only thing I wish it had was HD video instead of SD. 720p would be nice on the S90, especially since it has a built-in HDMI port.

As for processing those Raw files, you have lots of company concerning the Aperture situation, myself included. I have all of my DSLR Raw files in Aperture, but images from the Olympus E-P1, E-P2, and Canon S90 reside in Lightroom, or are processed in ACR, then moved elsewhere.

As an evangelist for digital photography in general, I view it as my job to use and discuss these different cameras, software apps, and workflows. But personally, I really want everything in one place. And it's getting harder to have Aperture be that place.

Have you noticed that if you save as dng in LR 2.6, you can open them in the beta 3.0 and get the distortion correction as well as the better (to my taste) rendering of 3.0? ISO 3200 is surprizingly good! The 3.0 colour noise reduction is great.

Also, installing LR 2.6 of course installs the camera profiles, which are then available in 3.0

Nice tips David! Thanks for sharing those.

Good to know this information. Thank you for sharing with us.

I was thrilled to find the new RC of 2.6 and DNG converter. I am now using the DNG converter and LR3 Beta together and it's awesome! I also recently found that PT Lens has been updated for the S90. This gives perfect distortion correction for the S90. There is a bit more correction to be done beyond the base that is baked into the RAW files with DPP or LR. I wrote a little blog post about it at:
http://www.thekitch.com/photography/canon-s90-and-distortion

I've been enjoying your podcasts and you discussions especially about my favorite new tool, the s90!

Derrick- great posts and podcast on the S90 info, especially anchoring it to the LX-3 and DLux4.This was confusing to me at first. I was close to buying the Leica DLux4, but having a G9 that rarely goes with me, I think the S90 will replace the SD800is for me and give me RAW w/o CHKDK.

Anyway, Tom Hogarty gives a very clear picture of the ACR 5.6 / LR 2.6RC / LR Beta3 differences. I am using all three and PTLens as a plug-in so this really helped me see what is up. I rarely use DNG (most of my files are 14 bit Nikon NEFs and I like to keep the whole NEF and all its proprietary Nikon metadata / EXIF for use in NX2), but it looks like the best of both worlds for a while is either be happy with LR 2.6RC or use the DNG converter and import to LR Beta 3 to use the superior sharpening and noise reduction there.
Here is a link to John Nack's blog where he quotes Hogarty: http://bit.ly/3N8tjN
'According to Camera Raw/Lightroom PM Tom Hogarty, "The Lightroom 3 beta has not been updated with this new camera support. If you're working with one of these newer cameras and the Lightroom 3 beta, please use the DNG Converter 5.6 Release Candidate to convert proprietary formats to DNG files that can be used in the Lightroom 3 beta." '

Well, I am too an S90 owener, and Aperture user. When I got my S90 a few days ago, I was frustrated to discover that Mac OS-X (and of course Aperture) doesn't support it. I had to do something about it, so I did some experiments and I came up with a solution with which I can live, until Apple comes up with a new Digital Camera Support.

You can read about my findings here:

Since the CR2 files the S90 produces can now be directly imported in Aperture, you can use any of the existing Aperture plug-ins to correct the distortion, such as PT-Lens etc.

I hope you find it useful.

If you are interested in using Aperture for your S90 CR2 files, please see this.

I own an S90 too and I also use Aperture, so either I had to shoot JPGs with the Canon or treat them with Adobe DNG converter. Instead, I managed to find a way to import the S90 files, with only a simple preprocessing step.

I hope you find it useful.

Hi,
I have just bought a Canon S90 because I wanted a small camera that shoots RAW. I was disappointed with my first download because all the shots in RAW would not come out in iPhoto. I got a message that :
/private/var/folders/Gs/Gs10lvNpGqm8oZmOM-euGk+++Tl/-Tmp-/iPhoto/img_0001.CR2
could not be processed. The files I shot in JPEG came through OK in iPhoto and the files I shoot in RAW on my Canon EOS 5D come up with all the processing options.

I would be very grateful if you could tell me what I have to do to access the RAW files from the S90.

Could you reply to my email address as I thing I will never be able to find my way back to this forum.