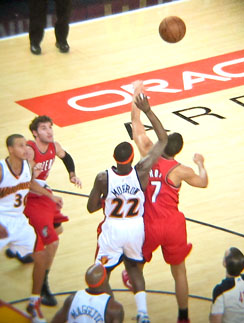 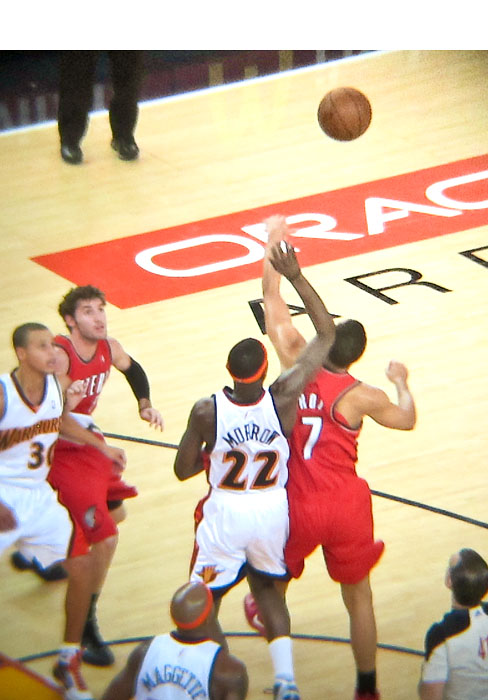 Digiscoping is the art of using a spotting scope to increase the lens magnification of a compact camera. I first heard about the practice when birders with expensive monoculars would try to get photos of their subjects by holding their digicams up the eyepieces of their scopes and taking pictures.

When I was at the very top of Oracle Arena Friday night for a Warriors game, I had the Canon PowerShot S90 in my pocket and an Orion EagleEye 8x32 Wide-Angle Monocular around my neck. 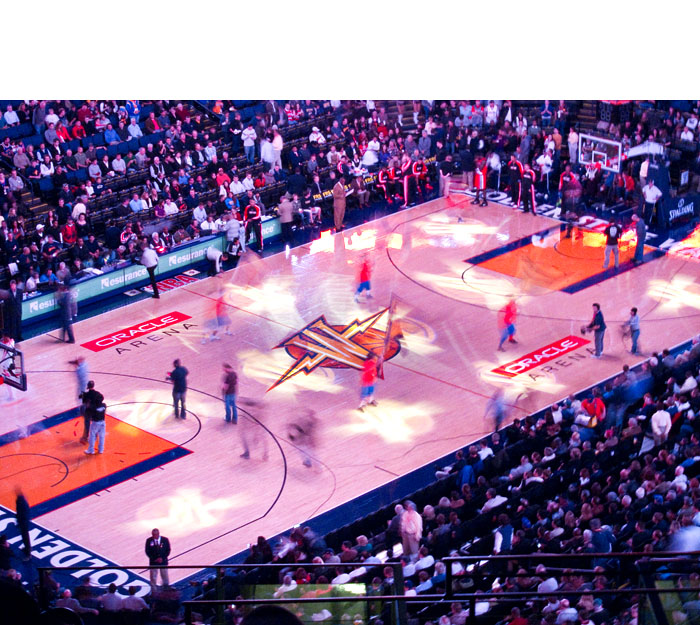 Both of these images are from the upper part of the second deck at Oracle Arena in Oakland, CA. The top shot was digiscopped while the bottom image was captured with the Canon S90 at 105mm. (Click to enlarge.)

Right before tip-off, I had what I call a Reese's moment: what if I did my own brand of digiscoping using the monocular as a tele-extender for the S90? After all, the S90 can handle high ISOs and the zoom lens seemed like it would fit OK with the eye piece for the Orion. And did I mention that I was way up there in the cheap seats? 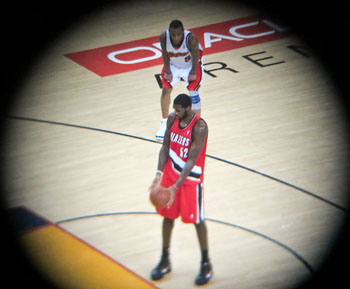 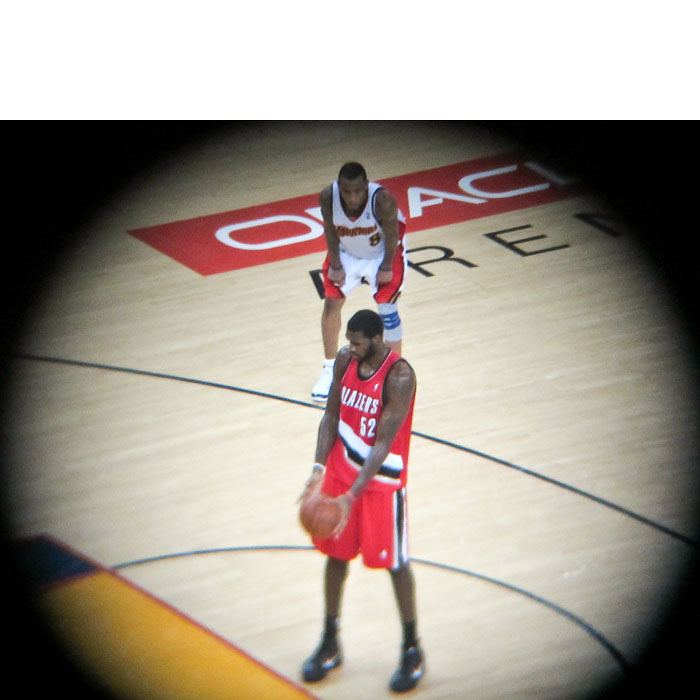 My first digiscoping inclination was to zoom the S90 all the way out to 105mm so the image filled the frame while I held the monocular in front of the lens. But I had a hard time getting a sharp image with this configuration. So I then back it off to 85mm, and finally got the best results at 50mm. The only downside to this approach was that I had an image circle in the middle of the frame with black all around it. But it was worth it to get the sharper picture. You can see this effect with the Greg Oden photo. For the shot of the jump ball (top of the article), I cropped out the black area.

Here's Greg Oden of the Portland Trailblazers preparing to shoot a free throw. The scoping effect will be cropped out later. (Click to enlarge.)

I played with a lot of settings on the S90, and most of them worked OK. I had to keep the ISO at 800 or above to deal with the lighting and the optics. At one point, I switched to the Low Light setting on the mode dial, and just left it there. Even though I lost some resolution doing so, it was just so easy, and the images looked better than at many of the other settings.

Obviously this kind of DIY rig isn't for serious work. If I were covering this game as a shooter, I'd be down on the floor with my DSLR and fast glass. But on this night, I was just a spectator in the cheap seats with a little time on my hands. And this is yet another example of: the best camera is the one you have with you.

More Articles About the Canon S90

Want to go super on the cheap? Here's a monocular you can get for $6:

A lot of pro arenas won't let "normal folk" in with anything more elaborate than a point and shoot.

My one disappointment with the samples you posted above: No cheerleaders! :-)

There is a replacement firmware for many of the Canon point and shoot cameras including the S90 called StereoData Maker it's based on CHDK and gives you more control of the camera and has features to support digiscoping and best of all its FREE.
http://stereo.jpn.org/eng/sdm/index.htm