Olympus E-P2 vs the Canon S90 at High ISO Settings 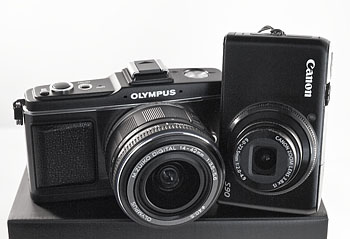 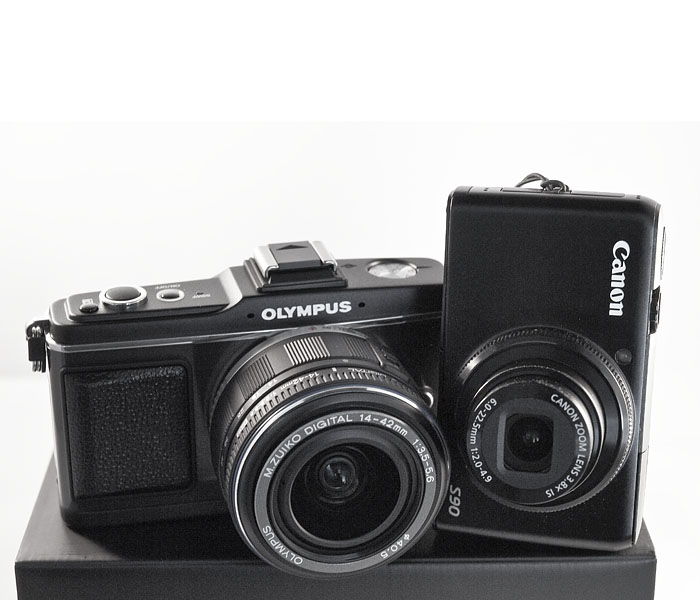 The Canon PowerShot S90 and the Olympus E-P2 are two of the more tantalizing portable cameras in the news right now. The S90 is a sophisticated compact that slides in your shirt pocket, and the E-P2 is a larger micro four thirds system camera that offers interchangeable lenses, electronic flashes, and even two different accessory viewfinders. It has a bigger 12.3-megapixel, four thirds sized image sensor compared to the S90's 10 megapixel, 1/1.7-inch CCD. But these two cameras do have one thing in common, they both preform admirably in low light.

I know this because I've tested each individually. Back in June, I tested the Olympus E-P1 for image noise, and was happily surprised that it performed great up to ISO 1600, and decently up to 3200. Since then, I've done plenty of real world street shooting with the E-P1, and have been happy with the results.

I've also been testing the Canon S90. Just last week I pitted it against a Canon G9, and the S90 blew it out of the water.

So, how would the pixels shake out if we compared the $430 Canon S90 against the more expensive Olympus E-P2? Well, that's exactly what I did with this test. You can see the full sized test shots at ISO 100, 400, 1600, and 3200 on the TDS Flickr site. I've included a lower resolution image here too for reference. But to really see the differences, you need to look at the full sized shots on Flickr. 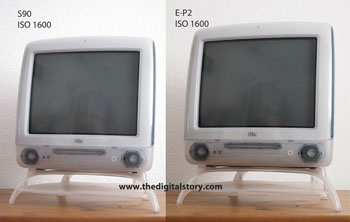 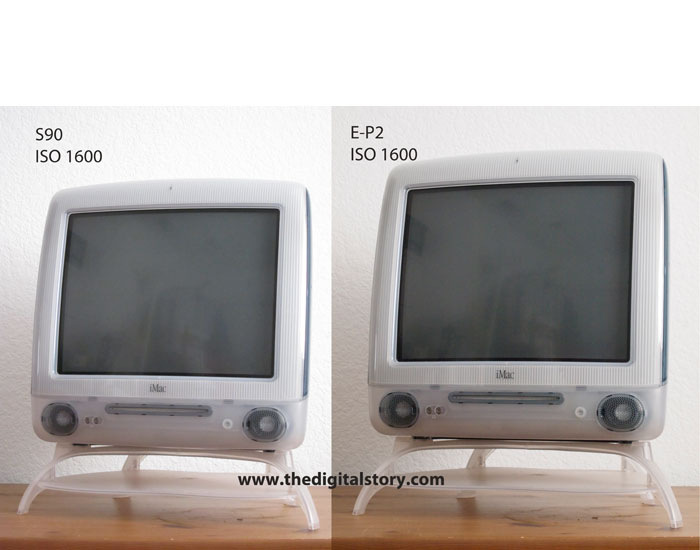 The bottom line? The Canon S90 put up an excellent fight. At ISO 100, it's hard to tell much of a difference between the two cameras. By ISO 400, they are still going toe to toe. But at ISO 1600, the E-P2 begins to pull away from the S90. And the difference becomes even greater at ISO 3200. The biggest advantage I see at 1600 and 3200 for the E-P2 is that it retains more image detail than the S90. My guess is, that by 1600, the S90's noise reduction system is beginning to take its toll on sharpness.

The test itself was very simple. I tripod mounted both cameras and put them in Programmed Exposure mode with Auto White Balance. I made not other adjustments other than moving the ISO setting from 100 to 3200 in full stop increments. I then opened each image in Photoshop at 100 percent and positioned the pairs side by side. I did not apply any image editing to the shots.

For small sensor cameras, I think both look great. And even though there are lots of feature differences between the two models, one thing we know for sure: each can handle itself just fine when the lights go down.

It is nonsensical to call four thirds "small sensor," unless you also think that APS-C is a "small sensor." On the vertical axis APS-C is less than 20% smaller vertically than APS-C, whereas 1/1.7" is a LOT smaller. On the horizontal axis the difference is slightly larger, but of course many of us crop to 4:3 or 5:4 anyway, negating that difference.

Every single article that compares sensor sizes needs to include this graphic, because writers and readers clearly are incapable of understanding the relative sizes of common digital sensors without it.

If you want to do sensor size comparison, should you not use percentage difference based on area instead of height? Then you will see that its not just 20%.

No, bubba, you should not.

Given that the resolution differences are't going to be visible at web resolutions, one must assume that you care about resolution ONLY if you are making prints of your work or publishing it. Since the most common paper sizes all require cropping to a format that is closer to 4/3 than it is to 2:3, any sensor with a 2:3 aspect ratio has wasted pixels on the long axis. So no, you should not count them. And in terms of linear resolution -- which is how nearly all resolution measurements (e.g., MTF) are made, the answer is exactly the one I provided: less than 20%.

One might argue that sensor area is more important for noise (as opposed to resolution) but if the above comparison shows anything, it's that sensor area is not everything. If it were, the four thirds sensor should absolutely destroy the 1/1.7". But it is only a stop or a stop and a half better. Oversimplification is just that: over-simplification. Sensor geometry, design of photosites, on-chip amplification, read electronics and clocking, A-D conversion, color discrimination (which is of vastly underrated significance, especially among poseurs), shading, postprocessing prior to writing the RAW file, etc. are ALL just as important as pixel size.

This is also true in scientific imaging, where (by the way) I make my living. The sensors that I use at work (all CCD; CMOS is, at this time, still for consumer crap) cost from $30,000 to $400,000, and in my world a 2 x difference in linear reolution is considered a big difference; 1.18 x is not.

Interesting test - but if you look at the images, the S90 has a massive amount of sharpening and Noise reduction going on at all ISO's which results in sharpening artifacts, and the image looking sharper up close. Not bad for this size sensor, but the Olympus is a long way in front on the image quality - which you would notice far more in Print.

The Olympus also has the ability to shoot in RAW which means you can get more out of the file than can be seen from these jpgs.

Cool, there are actually some worthwhile ideas on here some of my subscribers may find this useful, I will send a link, many thanks.