An Inside Look at a Live Action Video Project at Lynda.com

When I first started recording training titles with Lynda.com, everything was screencasting. I'd sit in a recording booth with a producer on the other side of the glass, and explain into a mic what I was demonstrating on the computer. The audio and screen capture would then be combined into a QuickTime movie and published. 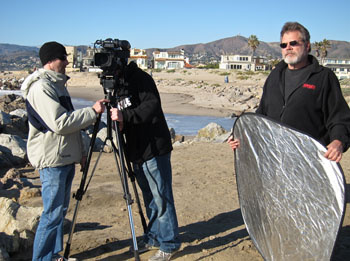 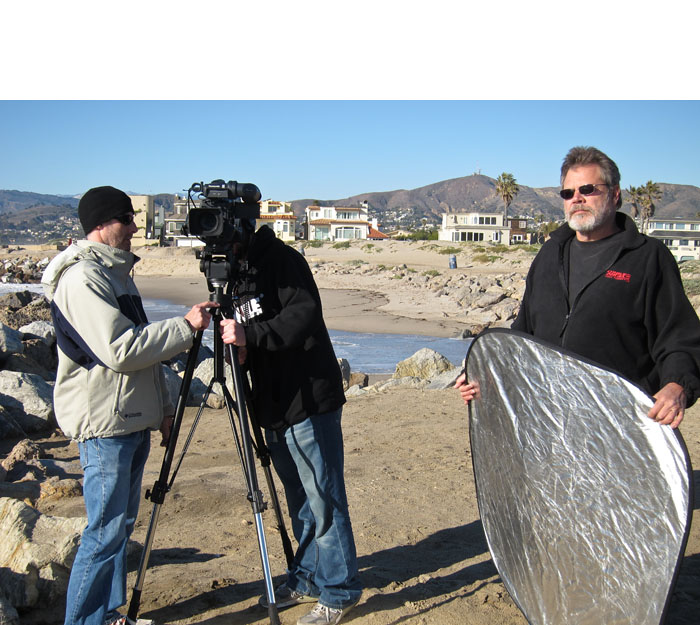 I still do a lot of screencasting, but in 2009 we decided that many of my upcoming titles would benefit by including live action video too. As you can image, this adds a whole new level of complexity to the project. After some trial and error, our first success was the Natural Light Portraits Photo Assignment where I combined live action demonstration of photo technique with screencasts that analyzed the results. We followed this approach with two more photo assignments, that are also doing well.

This led to a more ambitious project that we're currently shooting in Ventura, CA. I can't release the title yet, but I can say that it involves getting stunning photos from cameras such as the Canon S90. This project combines live action in the studio and on location, plus screencasting in the booth. I have a few shots from the live action shoot outside that we recorded on Tuesday, and I thought you might like a sneak peek. 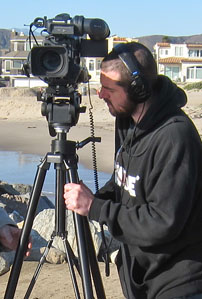 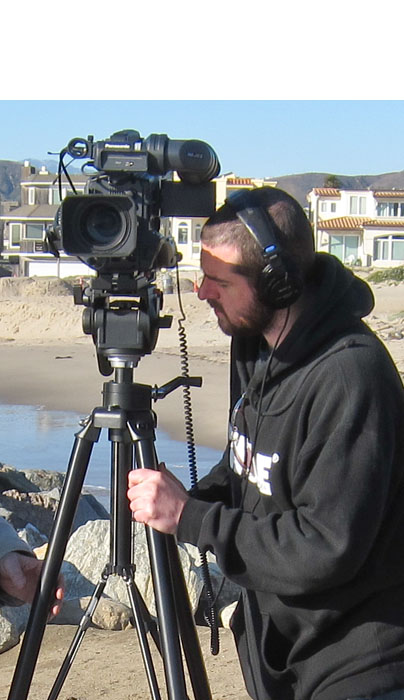 Generally, we work with a 4-person crew, which is highly efficient in movie making. Our filmmaker, Jacob Cunningham, shown here working the camera, directs the shoot in coordination with the producer, Samara Iodice. Along with me, we are the decision makers on the spot. And there are many decisions to be made. Jacob, by the way, also shoots documentaries, and is a local celebrity. We also have a lighting expert, Loren Hillebrand (holding the reflector in the top shot), and a grip, Andrew. Loren has years of filmmaking experience, and I've yet to encounter a lighting problem that he could not solve. This is the kind of experience you need when working with a small crew.

We script out my lines beforehand, then in the field I have to work from memory. This is a bit of a challenge, but we do it this way because we like having the takes complete. Yes, the editors are fantastic, but they already have a long list of things to do. Fixing one of my brain freezes isn't really time efficient in this scenario. So when I botch a take, we shoot it again until I get it right. 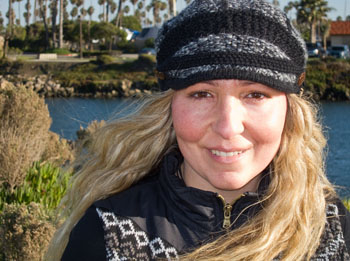 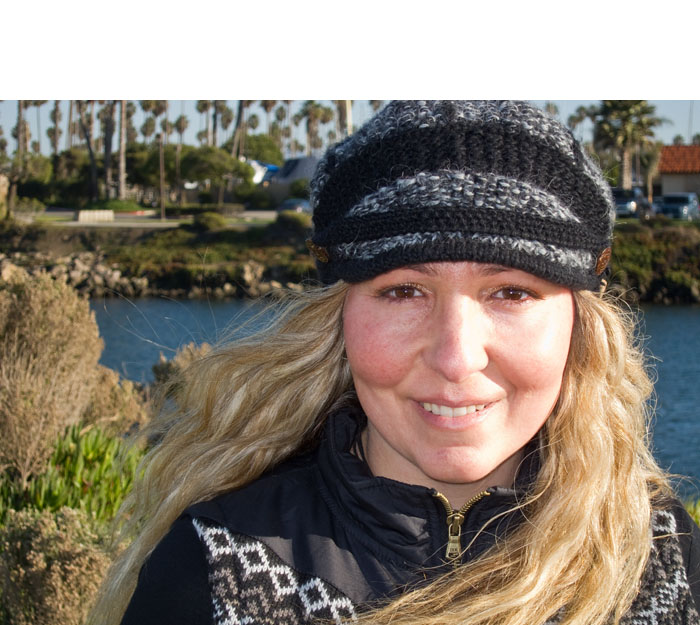 This is where my preparation is so important. I need to know the content cold. Because when you're standing in front of the camera, there are a dozen things racing through your mind. And if you don't know exactly what you're going to say, you won't nail the take. I usually take a couple weeks to prepare my content before heading to Ventura for the shoot.

Even with all of this planning, things never go the way you think. For example, at the last minute, our model backed out. So our producer, Samara, had to stand in and model in addition to her other duties. This image of her is one that I captured with the Canon S90 while discussing portraits.

These unplanned challenges always cause a chain reaction. In this case, Loren had to run the slate, then once we were rolling, go back, grab the reflector, and manage the lighting. It's a constant exercise in problem solving. This is part of the excitement, and it's also the reason why I'm dog tired by the time I return to the hotel room.

After the shooting is completed, all of the content is logged and handed over to the editors. These folks are great, and they improve the work we did in the field. Once the edited rushes have gone through testing, we finalize the footage and release the title into the Online Training Library for our viewers to use and learn from.

I'm hoping that the project we're working on this week will be released in early Feb. 2010. Once it's out, I'll have more anecdotes to share. But for now, I've got to head to the studio, because I have a full day of screencasting ahead of me.

Nice write-up, Derrick! I think this is going to be one of our best live-action courses yet. And you're right: our producers are the best! Of course, I'm biased. :-)

Hey I know those guys and that gal. Samara, Loren, Jacob are a terrific live action crew. We lynda.com authors are lucky to have 'em!

And of course Andrew too. Sorry, didn't see ya' here at first.

Nice blog post Derrick. Next time I run into you for the DC Photoshop Live Conference again, you will have to teach a class on this!

Kudos for giving such a creative blog. this blog was not only knowledgeable but also very stimulating too. We find only few professionals who can think to write technical articles that creatively. All of us look for information with regard to a topic like this. We ourselves have gone in detail through several blogs to acquire knowhow with respect to this.Looking for much more information from you !!

Kudos for hosting such a creative portal. this website happens to be not only useful but also very artistic too. There normally are very few experts who can think to write technical articles that creatively. we keep looking for content on a subject like this. I searched through dozens of blogs to acquire knowhow about this.Looking to many more from your site !!

Kudos for maintaining such a wonderful weblog. Your site was not just knowledgeable but also bvery imaginative too. We find very few bloggers who can create technical content that creatively. A lot of people are on the lookout for content regarding a subject like this. I Myself searched through several websites to acquire information about this.Keep me informed when you write more on the subject !!

Thanks for posting such a informative blog. Your website happens to be not just useful but also very artistic too. We come across a limited number of people who can think to create not so easy content that creatively. All of us are on the lookout for articles with regard to a topic like this. We ourselves have looked through dozens of websites to come across information about this.We look forward to the next posts !!

We should thank you for creating such a terrific portal. this blog is not only knowledgeable but also very artistic too. There normally are very few people who can create technical articles that creatively. A lot of people search for knowledge with regard to a topic like this. I Myself went through many websites to acquire knowledge about this. Keep up the good work !!

Thanks for maintaining such a creative blog. Your website was not just informative but also very artistic too. We find a limited number of professionals who are capable of write technical stuff that creatively. All of us search for content about this topic. I searched in dozens of blogs to build up on knowhow with respect to this.I will check back often !!

I appreciate you for maintaining such a informative site. Your site was not just informative but also very inventive too. We come across very few people who can write not so easy articles that creatively. we search for articles with regard to this subject. We ourselves have looked through dozens of websites to build up on knowhow about this.Keep me informed when you write more on the subject !!

Kudos for creating such a informative weblog. this site is not just useful but also bvery imaginative too. We find very few professionals who are capable of write technical content that creatively. I search for knowledge with regard to a subject like this. We ourselves searched in many blogs to come across information with regard to this.Looking for much more information from you !!

Kudos for posting such a useful website. this website is not just useful but also very artistic too. There normally are a limited number of professionals who can think to write not so easy stuff that creatively. A lot of people search for articles with regard to a topic like this. I Myself have gone in detail through dozens of blogs to acquire knowledge with respect to this. Keep up the good work !!

Thank you for posting such a creative weblog. this blog happens to be not only informative but also bvery imaginative too. We find a limited number of people who are capable of create not so easy articles that creatively. we keep looking for information about this subject. I Myself have gone through several websites to build up on knowledge with regard to this.Looking for much more information from you !!

Kudos for maintaining such a wonderful portal. this website was not only informative but also bvery imaginative too. We find only few bloggers who can think to create technical content that creatively. All of us keep looking for knowledge with regard to something like this. We ourselves have gone through dozens of blogs to come across knowhow with respect to this. Keep up the good work !!

I'm happy you shared the video with us!