Review of the Solio Mono -- a Solar Battery Charger 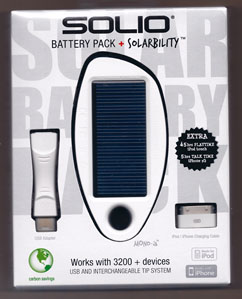 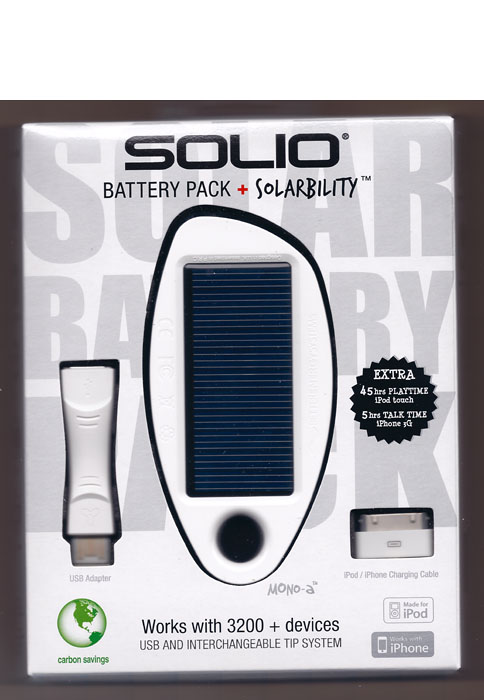 The eye-catching feature of the Solio Mono charger

is the 3" solar cell that can charge the internal 1000Amh Lithium-Ion battery. And indeed, this is a selling point for the device.

But if you're going to be happy with this purchase, you'll have to take a broader view and see this as an all-purpose back-up charger for your iPhone, digital camera, handheld GPS, or other small electronic device. That's because the easiest and quickest way to recharge its Lithium battery is via the USB port on your laptop or with a separate USB charger. This only takes a few hours. If you have to depend on the sun for a full recharge, it will take a few days. And that's only if you have direct sun shining on the device.

So the way you might want to think about the Solio Mono is that it's a back up charger for you small electronics that his its own back up via its solar cell.

I purchased one at the Apple Store for $79 specifically to charge my iPhone 3GS while working in the field. This particualar kit comes with the connections required for iPhones and iPods. The same charger is also available on Amazon for $59

, but I couldn't tell which specific connections that kit came with. Either charger has the ability to replenish thousands of devices, it just depends on having the right connection, such as an Apple Dock Connector, for your particular gizmo.

You can tell how full its battery is by the number of green blinks you get when you push the clear button on the back of the device. Each blink indicates 20 percent charge. So, five blinks is full, and one blink is 20 percent.

I was happy with how the Solio charged my iPhone. For example, when the iPhone was at 59 percent charge, I connected the Solio via its dock connector cable. I pressed the clear button to initiate the charge, and 90 minutes later the iPhone was back to 100 percent full. The Solio charger still had 40 percent capacity, leading me to believe that it can come close to fully charging the iPhone.

I generally replenish the Solio's battery using its USB cable and the iPhone USB wall charger. It usually takes a few hours to top off the Solio after I've used it. I've also tried recharging the Solio via its solar cell. I got about 20 percent charge for every 5 hours of direct sun. I will use this feature more when camping to gather as much energy as possible, especially for topping off the Solio's battery. I like this option as a back up feature. Just don't get it in your mind that you're purchasing a solar charger that will keep your electronic device running on a daily basis.

that holds the charger itself perfectly in the internal pouch, plus all of the cords and connecters in the secure mesh area. It almost seems as though the Navi Shield was designed specifically for the Solio Mono.

Overall, I like the Solio-Mono. I'll charge it completely before I hit the road, then top it off using the solar cell. By keeping my iPhone charged, I know I'll always have a 3-megapixel camera, voice, SMS, email, and Internet available as long as there's a cellular connection.

Great Review. I am really impressed with this product. thanks for sharing wonderful post with us.

I bought this charger partly after seeing your review. I shared the link with my dad. He wrote:

Interesting article & I had not fully realized that the solar cell charged an internal battery that would then transfer its charge to your device (iPhone battery, etc.) There is a typo tho...it's 1000mAh not 1000Amh. Big difference as it's a battery whose capacity is 1000 milli Amp hours, not a 1000 amp battery that lasts for 1 milli hour. The battery can supply 1 mA for 1000 hours or 1 amp (1000 mA) for 1 hour, etc., and stuff in between.

yea it charges by the sun at a rate of 66.7 mili amps an hour providing you have full sun lol i have the charger myself. so the internal battery holds 1000 mili amps and it takes 15 hours to fully charge.

I have the Solio Mono, but left under the sun, it would only charge up to 40% (two blinks), then it won't charge anymore. I don't know if this is a normal thing or a "safety" feature of the device.

I've asked the custcare of Solio to help address this concern, but they have not replied - and my inquiry has been hanging in the air for 2 months already. :(

Solio only charges about 50% after prolonged use, best 60%. I tried to get a new one from the company but had little to no success. Guys please get one of the reps from the company to address our concerns as I couldn't get any email response at all.