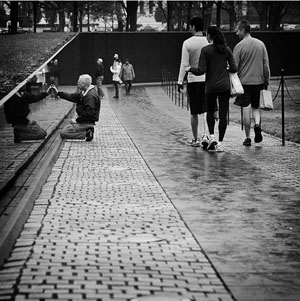 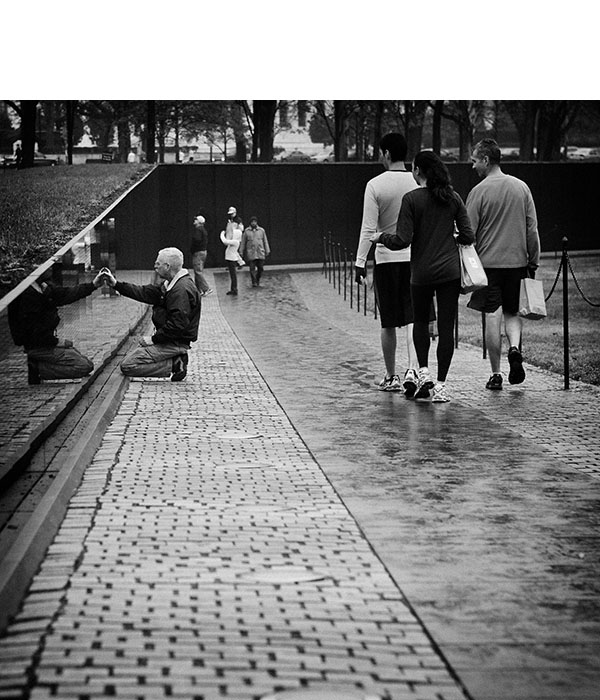 "I spent four hours Thanksgiving morning walking the National Mall in Washington, DC," writes Rick Brandt. "Among my stops was the Vietnam Veterans Memorial. I worked my way from the eastern end of the wall to the western end. At the very end of the western wall, where there is only one name, laid a wilting carnation -- an interesting photo opportunity -- I took it. Then I looked up and saw this gentlemen kneeling at the wall -- he was about 50 yards away and I considered swapping lenses -- I had the 24mm-70mm on my 5D, and the 70mm-200mm was in the backpack."

Photo by Rick Brandt. Click on image to zoom to larger size.

If you have a candid you'd like to share, take a look at our Submissions page, then send us your Grab Shot. We'll try to get it published for you on The Digital Story.

And you can view more images from our virtual camera club in the Member Photo Gallery.

I am really enjoying reading your well written articles. It looks like you spend a lot of effort and time on your blog. I have bookmarked it and I am looking forward to reading new articles. Keep up the good work!