Canon Left the Door Open for Sony at PMA

Looking back, Canon may someday regret its decision not to attend PMA 2010.

New concept cameras announced by Sony that will compete in the small DSLR market.

Why would I say that? Because suddenly there was more breathing space for those camera manufacturers trying to make a move in the market. And quite honestly, I'm seeing more traction than I had anticipated from the likes of Sony, Panasonic, Samsung, and Olympus. For example:

I think it's going to be interesting to see how all of this plays out over the coming months. Surely Canon and Nikon will continue to hold their impressive market share. At the same time, however, I wouldn't take my foot off the gas if I were any of these competitors. Sony saw an opportunity with this tradeshow, and they are definitely seizing the moment. 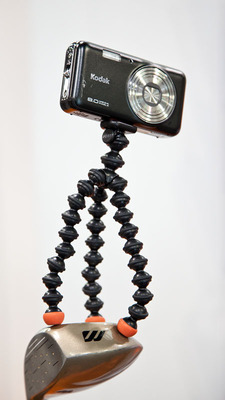 Plenty of Goodies Too

Of course the floor wasn't just all serious hardware. Accessory companies such as Joby showed off their latest wares. I had fun with the Gorillapod Magnetic that features three neodymium magnets that really latch on to metal surfaces. Now you have a whole new way to steady your compact camera.

Lowepro, Think Tank, and Tamrac each saw a lot of activity in their respective bag booths. Obviously I was focused on Lowepro (since I am their photography evangelist), and saw good reaction to the new SlingShot series that improves on the already popular design. The Pro Rollers were also getting a lot of attention today.

In terms of what wasn't there, a very noticeable omission today was the lack of software of the show floor. In large part I think this was because Adobe chose not to attend the show. But in general, it felt like the trend this year was more about taking pictures than working with them on your computer.

I'm sure other things will jump out at me over the coming days. But these were the standouts on my first walk through the expo. I think PMA is still relevant, and many who attended the event today would probably agree.

PMA is something of a mouldering show -- it's smaller than years past, it got moved to Anaheim from Vegas, and players like Canon and Leica and Pentax have bailed on it. Photo manufacturers have focused their attentions these days more on CES and Photokina.

As far as Sony goes, it's a load of promises and FUD. They've had over 2 years to replace their enthusiast a700 model (while Nikon, using the same Sony sensor, has come out with the D300, D300s, D90 and D5000) and could only muster a body under glass.

Sony claimed after their purchase of Konica-Minolta in 2006 that they would be the #2 manufacturer within 2-3 years. Didn't happen. Their market growth has stalled, everyone and their uncle is selling DSLRs with video, and they're facing the fact that in Japan 10% of all interchangeable lens cameras were micro 4/3 units.

Hence the Fear, Uncertainty and Doubt (FUD): promise APS-C mirrorless cameras (with no actual release date) to try to hold back sales of Panasonic and Olympus units, while revamping their cameras (also no release date) to include video. It's a massive sea-change they've trying to implement, and it's transparent that this PMA they're telling people "Just wait, don't buy anything yet."

To me the most interesting announcement is the Samsung TL500/EX1, which hasits sights aimed straight at the LX3, G11 and Ricoh GX200/GXR. For $449 (list) it will have the same processor as the G11/S90 and have a Schneider 24-75mm f/1.8-2.4 zoom lens. (And it does video, not something that interests me.) If it performs well it will interest a lot of pros and advanced amateurs.

I think PMA is a show in transition, but it still has legs. And even though it's in Anaheim this year, it is returning to Las Vegas in 2011.

As for Sony, I agree, I think they are playing the market. And they are definitely a force to deal with. Their APS-C mirrorless announcement was targeted directly at Olympus and Panasonic. But until they actually have cameras in the retail channel, I think most folks will make their buying decisions based on what's available when they need it.

I just got an Olympus E-PL1 body, and I'm looking forward to putting it through its paces. Who knows what will happen with the Sony cameras and when.

I was more interested in the Samsung TL500 until I actually held it in my hands. The design seems a bit clunky compared to the LX3 or the S90. The menu system was nice, and the specs are great. But I was disappointed in its look and feel.

How did the AF seem?

Personally I am torn about the G11, since I didn't like the feel in my hands (and the viewfinder is better in theory than practice). If Ricoh came up with a GX300 instead of that $850 GXR with zoom module I'd have considered it, and the LX3 is a bit fiddly and hard for my big paws to grasp.

By the way, when posting here, if you get the captcha wrong you get sent to an error-page, but when you click the link back to re-post the message you get the edit screen MINUS THE CAPTCHA! So you have to copy what you wrote, then reload the webpage to get the Captcha back....

Great article, I wonder how it is all going to play out with Canon. They seem to have rested on their laurels in the past few years. AF problems come to mind, loosing mind share to Nikon.
Adam

I don't think Canon has been resting on their laurels. They are coming out with a bunch of new lenses. Those AF problems I think are magnified on the internet. A working pro isn't going to switch on the drop of a hat. It's too expensive to do that. It cost Scott Bourne $10k to switch. Most working pros don't have that kind of cash to switch.

I think that is exactly why it's being perceived as they are resting on their laurels. It is too costly to switch between brands but some of the Nikon releases to date have been beating up on their Canon counterparts. They seemingly had a big lead in digital and have let that lead disappear of late, Nikon has caught up and Sony is in the game now.

This is in no way to say Canon is loosing, I don't think that to be true at all I have lots invested in Canon glass myself and want to see them push the boundaries further and further. It just seems that they have slowed to the industry pace for innovation rather then pioneering as of late. Maybe that is a just a misconception but I think it's a fairly common misconception in the market these days.

Owning plenty of Canon glass and a few DSLR bodies myself, I can attest to the difficulty of switching... that is, if I wanted to. Right now, I don't. But I have added Olympus micro four thirds to my camera bag.

I think the comments here raise legitimate points. My take on the situation has been that Canon takes a slightly conservative approach to development at the pro end of the product line, and that has served them well until the last 2 years. On the consumer side, such as with the T2i and S90, I think they still have lots of mojo.

But what I'm seeing at PMA is a hard push from Sony across the line, from Nikon at the top of the line, and from Olympus, Panasonic, and Samsung in new areas.

Canon can afford to lose some market share to these challengers. My question is: what steps are they going to take to prevent that from happening?