Is the Canon 60D Built for Video, or What?

The minute I saw the "swing out" Vari-Angle 3-inch Clear View LCD screen with 1,040,000 dot/VGA resolution (plus anti-reflective and smudge-resistant coatings), I knew the new Canon 60D was built for video recording as much as stills. 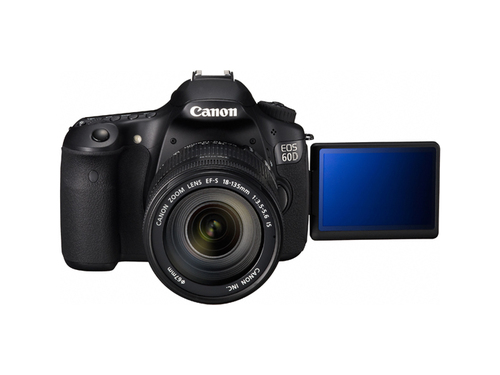 The feature that I didn't see in the press release, but one that I'm sure is there, is an external mic jack. Without that, the rest really doesn't make a difference.

The 60D has some other cool stuff, such as a built in Speedlite transmitter. But I'll save that for when I can get more details.

Yeah, the mic jack is in the 60D and some control over the auto-gain control, which will be nice. (Though I currently record all my audio through my laptop.)

My biggest problem is that it seems like Canon is moving more towards a consumer camera. It's not all that bad, but it doesn't seem right that it's price really isn't much cheaper than previous x0D bodies. (Then again, Canon is trying to sell 5 DSLRs under $2000, and their price structure is pretty odd, especially with the 7D.) I think Canon's problem is that there needs to be differentiation with the 7D, but still had to add video to the feature set. I'd wondered what Canon would do for a year now, and I don't know how I feel about the changes.

1. Sensor (this is probably the most important!): This should be great, it's like the 7D and T2i one.
2. Body: Everyone needs to hold one before they decide, but I'm going under *very* skeptical. The plastic is one thing, which makes some sense, but I don't like the fact that the body is smaller overall. I've found the current side of the x0D and 7D bodies really really really comforting. A bigger grip is nice! I also don't like the fact that there's less buttons.
3. The new controller thing: Neat, and that will take an immense amount of getting used to if I upgrade. It might mitigate part of the problems of less buttons only because it makes shooting with a grip easier. Still I'd take a plastic 50D with the new sensor.
4. Loss of a PC sync terminal. Really surprising. I never used mine much, but I've also planned to get into more flash. I know lots of people use it.
5. Wireless flash: WooHoo! For me, that pretty much makes up for the previous one. However, it means newer flashes will be required.
6. Burst rate: :-( :-( 5.3fps isn't bad, but that's .3 up from the 30D, 1.5 down from the 40D, and 1 down from the 50D. I've been using the 30D for sports pretty well, and the 40D was nearly enough to upgrade. The 50D was a reduction in IQ, and the 7D is salivating. There's a nearly 3 fps difference between the 60D and 7D at a $500 difference. That's a lot and the reason, I don't have the 7D, but it makes a HUGE difference, even 1 fps does. Consider that the 1D Mark IV is 10 fps, and $4995 retailâ€¦ (dream machine, haha!)
7. SD Card slot. :-( I like the little guys, I do. But they can't compete with CF cards! CF cards are so much more durable and faster, and somewhat harder to lose. (They're also harder to snap in half, yes, that's happened to an SD card, though it still works amazingly enough.) I also spent money on CF cardsâ€¦ This makes clearing the buffer a problem, even with the uber-fast Class 10 SD cards that go up 30MB/s. The new CF cards can do 3x that, mine do 1.5x, and the semi-expensive SanDisk ones are twice as fast. (So uber-, really shouldn't apply like I usedâ€¦)
8. E3 remote terminal. The more consumer version. Less remote options, but more affordable ones. Not a huge deal, unless you spent $150 on a Canon remote for an x0D Camera. If I get the 60D I'll be glad I waited to get mineâ€¦ (I've saved money by tethering + self timer + mirror lockup)
9. Loss of Wireless file transfer unit. - Doesn't matter much to me, those are way to pricey!
10. Mode dial lock button. Neat! But not much of a difference.
11. LCD. Yeah, this really is a big plus. No matter how you look at it. It's a really useful!

I think my biggest problem is that Canon didn't really treat this like an x0D camera. I mean, changing certain parts of the body is fine, but features were also removed. I feel like this is the G7 of 2010. We'll see how this goes. :) Any of the above could change.

I agree with pretty much everything Michael said. I for one probably won't continue on the X0D line. Unfortunately I'll probably move up instead of down. I probably have $500 in CF cards alone. Personally I think Canon should of killed this line. The 5D and 7D have messed up the product line. I personally think the 7D should of taken the place of the 60D. I mean how much of a difference is their between the T2i and the 60D anyways.

While there are some nice new features on the 60D it's not a true x0D successor for me especially with the move away from a magnesium alloy body. What they give with one hand they take away with the other.

It seems Canon have painted themselves into a corner with the model range and features since the 7D and new models will be compromised in order to prevent overlap/cannibalisation of sales.

I think I will stick with my trusty 40D for a bit longer and see what the 7D replacement will be like in due course.

Yeah, just taking a look at the features of the Canon 60D.. it looks nice.. but is it worth the money to upgrade? I don't really think so. And Kevin makes a good point.. Why did they have to move away from the magnesium body? Doesn't make sense...

Imagine there is a 7D mkii coming out with new function of 60D and the flip panel LCD. i think all of us will dive on it to get in....

then the X0D series surely will be discontinue.