Someday I will pay $400 for Z-Finder Pro

because they are clear, secure, and adjustable. But today isn't that day. Budget is too tight at the moment. But I do need a bright, crisp LCD magnifier for some upcoming video projects. So for the time being, I'll do it myself. 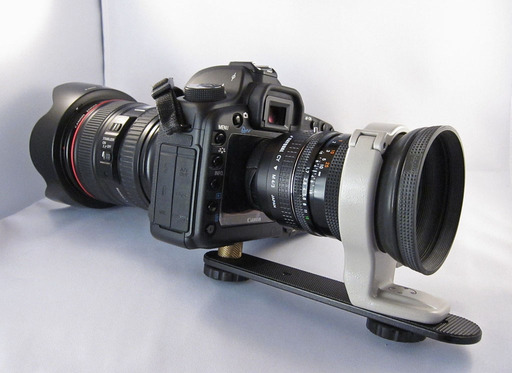 Figuring Out the Optics

I went upstairs into my mad scientist lab and started playing with lenses and mounts. My magnifier is based on the old "reverse lens trick" to increase magnification. I chose a Zeiss 50mm f/1.7 lens because of its wide opening. To get the right viewing distance from the LCD screen, I needed to add a couple spacers. I used my Rayqual Micro 4/3 adapter because it also had a large diameter opening. It was close to the right distance, but just a tad short. So I took a real lens cap, cut a large diameter hold in it, and mounted it to the Rayqual adapter. Perfect!

I added a little gaffers tape to the open end as to not scratch the LCD on the Canon. On the other end, I screwed in a rubber lens hood to serve as my eyepiece. That way I can use the rig in bright light.

I wanted something solid that didn't look too cobbled together. It dawned on me that the tripod collar for my 70-200mm f/4 Canon lens might work. You can get these cheap, BTW -- $12.99 from Meritline. For the bottom plate, I repurposed a flash bracket that had two tripod screws. One for the camera and the other for the Canon ring mount. The only problem was, it sat a little high. So I found a brass spacer in my lighting bag that lined everything up nicely. It doesn't look too bad, does it?

Pros and Cons for this Set Up

Cons: The image is beautifully crisp, but it doesn't cover the entire LCD, only the central area. This isn't a problem when the camera is tripod mounted because I can set up the shot, then remove the magnifier. But for action shooting this would be a problem.

Pros: Aside from being very sharp, I can fine tune the focus via the lens focusing ring. Also, I used stuff I already had (no cash outlay!). And, when I want to use the 50mm on my Olympus PEN camera, I just remove the bottom lens cap (that has a hole in it) and mount the lens to my micro 4/3s camera. So I can get double use out of this set up. (Since the PEN doubles the focal length, that means I have a 100mm f/1.7 lens for my E-PL1. Tell me that isn't useful at times.)

At some point this DIY rig will drive me crazy. Hopefully by then I'll have the money to buy a real LCD magnifier. Until then, however, I'm in business.

If you like do it yourself gear, be sure to check out our DIY Section here on The Digital Story. Lots of great ideas there.

Derrick, that is a very handy tool. I always love your tipps on saving by building it yourself.

However, in the calculation of the lens on the pen, it should be a 100/3.4 lens. The maximum aperture does not change when you mount it somewhere, but looking how the aperture number is calculated, it needs to adapt as the length adapts.

I just received a Hoodman HCRN hoodcrane, which is an armature that holds it's own loop against the back screen of my 5D. Does it's job, can't complain, but the real need I have is for a strong mag of the back screen when shooting video, and wanting to refocus on either a subject already in the viewfinder, or one I am panning to. You guys know that autofocus doesn't work using liveview on the 5D. And forget trying to focus this way using for instance, a zeiss 17-35mm conurus adapted lens...the really need the magnification to see well. Since I cannot use my double zoom focusing buttons on my 5D during shooting,I'm stuck using my eyes. I'm tempted to get one of the magnifying lenses that watch makers use...but that and the flip on loop of the Hoodman,and you're no longer flush against the rubber eyepiece...These loop devices have a simple problem, they assume you want to view the whole screen. Reading glasses don't have enough power (3.0 or so, isn't enough) to give me the zoom in to nail focus either, on a single subject. So, the hoodman helps a bit, looks sexy, flips up and out of the way, helps with seeing in bright suuny days...but doesn't solve my basic problem.

Biggest problem is autofocus not working with the 5D liveview, it's really upsetting. Even the zooming is giving me a headache, not working properly. I don't get why the device can't be upgraded to provide better quality for us, especially for the price they are asking!

The f-stops gets calculated with the focal length, not the resulting magnification due to sensor size!