In the Air with the MacBook Air 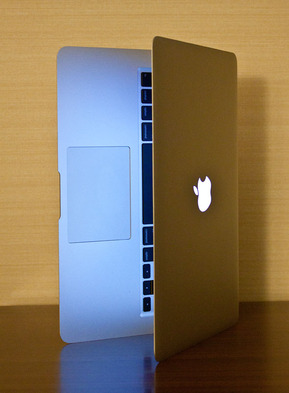 One of the best reasons to consider an Apple MacBook Air is for travel. It has many of the attributes that I've come to love about the iPad: it's light, has long battery life, and works well in tight spaces. But unlike the iPad, the Air has a full size keyboard, more powerful processor and graphics card, more Ram, more storage, bigger screen, Mac applications, and a built-in SD card reader (13" model). But those are all just specs. How did it perform on a coast-to-coast flight in economy class?

Quite well, thank you. As I type this, the battery is still going strong. That is such a luxury during a full day of travel. Then, there was the surprise. The wedge shape, which I didn't think much about at first, works very well when you slide the laptop edge-down into the document sleeve in your carry-on bag. Space is always tighter at the bottom of the bag than at the top, especially in the front pouch where I like to store the MacBook Air. By sliding the Air edge-down into the sleeve, it fits easily, yet removes easily by gripping the thicker top. So, the Air's wedge design isn't just for beauty, there's a real practical aspect too.

The number one question I've been getting since I started testing the Air is, "How does it perform?" I think this is on peoples' minds because the first generation was a little under-powered. I have the 2.13 GHz model with 4 GBs or RAM. And it has performed very well. I've run Aperture, iMovie '11, Adobe Premiere Elements, iWork, and QuickTime. Movie editing was smooth, and Aperture 3.1 has been quite snappy. Over time, I'll have even a better feel for performance. But on the first flight, the Air was a joy to operate.

Another interesting aspect is that it doesn't get hot. Even during movie editing, the bottom was only slightly warmer than room temperature. Same goes for the display. I'm not quite sure how Apple pulls that off, but, between its light weight and lack of heat, the Air is the most comfortable laptop I've ever used.

And finally, I love the SD card slot. This is the first Mac that I've owned that has one. And when you're working in cramped quarters, it's great not having to fumble around for a card reader. I would shoot, then remove the card, then edit. Bliss!

I'll have more to report as this New York assignment unfolds. But, I'm happy to report that the Air flew with flying colors.

Oh, and just one more thing. I'm still using the iPad too. I took advantage of its 3G connectivity when I didn't have WiFi, especially while waiting for takeoff on the plane. It too has crazy long battery life. Plus, that's where my subscription to Popular Photography is.

What will decide whether I go for the Air 13" or a Macbook Pro 15" is whether it handles Aperture 3.1 well or not. How large libraries does it handle at acceptable speeds? My library is 30 000 images, and it works well on my three year old 20" iMac 2G dualcore.

Hi Derrick-I spoke with you at PhotoPlus the other day and showed you my MBAir 11 with 4GB RAM. I had a chance to put mine through some workflow today and thought it did quite well, better then I expected, quite snappy.

@Derek: Thank you and keep your MacBook Air posts coming. I am interested in the 11.6 inch and Aperture 2 (I don't see compelling reasons to upgrade to Aperture 3).

@Lisa: Since your own the 11-incher, if you have Aperture, please share your Air+Aperture experience with us. I appreciate it.