When the elevator door opened to the SoHi room on the 45th floor the Trump SoHo Hotel, I was greeted by the good folks at Adobe who were hosting the gathering there... and this spectacular twilight scene. 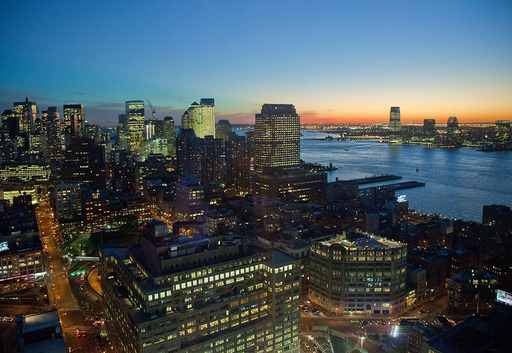 There was great food prepared and chilled wine at the bar. But I headed straight for the window with my Canon 5D Mark II over my shoulder. This image was recorded at ISO 3200, 1/10 of a second at f/4. I processed the Raw file in Photoshop Elements 9 using Adobe Camera Raw. There's still more work to do on this shot, but I wanted to share it while the memory of this beautiful scene was still fresh in my mind.

Great shot Derrick. Might be an interesting candidate to play around with some one-shot HDR...

Were you leaning the camera against something D? Cause at least the web version looks SHARP at 1/10 of a sec

Yes, there are some good post production possibilities for this shot, including one-shot HDR.

As for your question, Jim, I was leaning against a pillar with the camera against the glass. I was also using the 24-105 L zoom, which has a very good image stabilizer. I added a little, but not much, post production Unsharp Mask in Photoshop Elements 9.

Great shot D!! The 24-105 is a great lens for opportunities like this. Why did you choose to use PSE instead of Aperture for the post work?

Hi Ray, I'm testing Photoshop Elements 9 for a mini review, so I'm using it as much as possible right now. In fact, I didn't even load CS5 on the new MacBook Air for the NY trip. I knew if I did, I wouldn't work with PSE.

Two things I miss with the new Elements: 1) Organizer instead of Bridge and 2) a paired down version of ACR.

Aperture 3.1 is loaded on the MacBook Air, and all shots will end up there.

Nice image Ray, however I suggest you to head to the last floor of the Standard at Meatpacking and ... you'll see ...