For the longest time I had decent cell phone reception at my studio in central Santa Rosa, CA. Then one day, as if someone threw a switch, my service was terrible. I could barely complete a call before it was dropped, and sometimes I would have to redial 3 or 4 times just to finish a short conversation. I was so frustrated. 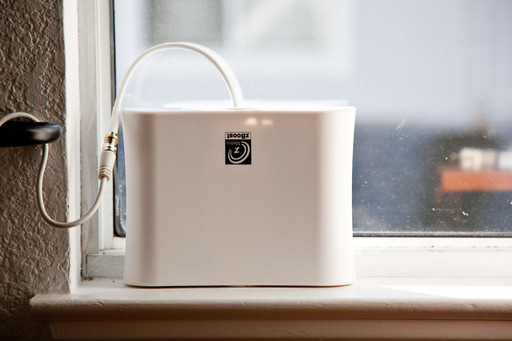 The signal antenna for the zBoost Metro in my window sill. Since this device doesn't require vertical separation like other single amplifiers, you can even use it in a single-level apartment or small office.

I knew the solution wasn't going to be AT&T -- I had contacted them about the problem, and they said everything looked OK to them -- I would have to come up with something on my own. And I did. The zBoost METRO YX540

How to Set Up the zBoost Metro

It works like this. First you have to find a location in your home or small office that has the best phone reception. In my case, I could get 2 bars upstairs in the room facing south. I placed the signal antenna (shown here) in that window. I set it on the window sill, but the kit includes suction cups if you want to attach it to the glass.

Then I ran the included coaxial cable down the stairs to the bottom floor where I previously had virtually no reception. I attached the zBoost Base Unit and made sure the light was green. I checked my iPhone downstairs, and I went from 1 bar (which quite honestly was really no bars because I couldn't complete calls), to 2 bars and sometimes 3. Before I let myself get too excited, I dialed up a couple friends. Perfect! I actually finished the conversations.

OK, now for the ultimate test. I have a friend who uses a BlackBerry on Verizon. We have not completed a call in months. I dialed her up. We talked for five minutes without disruption. And, on top of that, her voice sounded loud and clear. It was a miracle!

Once I had confidence that the zBoost was going to work, I ran the white coaxial cable along the wall, and for the most part, out of sight along the edge of the carpet. I could push it down in the crack so that it's barely visible.

The zBoost METRO YX540 is available everywhere for $199. It works with 800 and 1900 MHz frequencies, except for Nextel/iDEN. No problem for iPhones. It can cover an area as large as 1500 square feet. I have about 1,000 square feet downstairs at my studio, and the zBoost covers it easily. You get a system gain of about 50 dB, and it works with the following networks: CDMA, GSM, GPRS, EDGE, EVDO, 1xRTT, UMTS, HSPA, and 3G. It uses 3W of power in standby mode, and up to 7W when its working hard.

Since many of us have iPads too, I decided to also test the zBoost with that device. The results were a bit surprising.

I made sure WiFi was off for both the iPhone 3GS and the iPad 3G. The iPhone showed 2 bars and the iPad was displaying 3. But when I launched web pages on both devices, the iPhone 3GS beat the iPad every time. Generally, I think the iPad loads pages faster than the iPhone, especially on WiFi. But not using the zBoost.

Using 3G only with the zBoost, DPReview would completely load in 50 seconds on the iPhone 3GS and 1:30 on the iPad. If I turned WiFi back on, the iPad would beat the iPhone, loading in about 10-15 seconds.

So in my case, the zBoost does a great job with voice communication on the iPhone, but isn't really a plus for the iPad. Of course your mileage may vary.

You could not pry the zBoost Metro out of my hands. It has brought my cell phone back to life so I can use it with confidence in my studio.

What's interesting is that you actually need a tool to use your iPhone. I mean what is that all about? the mobile phone is supposed to be just that - mobile, right? it seems over time huge cell companies have forgotten their own motto on doing business. YOU HAVE TO PROVIDE CELL SERVICES EVERYWHERE! THey don't care much anymore since they got so huge.

On a light note, zeroboost is an amazing tool, a bit bulky for my taste but works like a charm.

Saw this post from your Verizon story. Why use the booster if you have wifi? I'm in SR, too, and don't get great 3G reception at home but with wifi, it's outstanding.