While testing the Canon EOS 60D,

I wanted to see if I could go from Raw capture to online publishing without using a computer. As it turns out, I could.

in to the 60D, then checked its status on the Eye-Fi menu built in to the camera. (Many new cameras are adding this feature. The menus will vary depending on the model.) 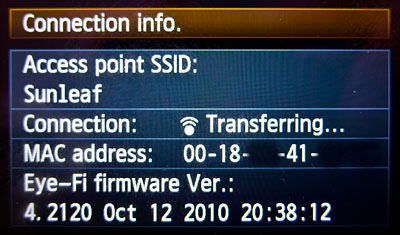 The menu takes much of the guess work out of using the Eye-Fi card since you get information about access point, connection status, etc. Plus, you can enable or disable the card's ability to transmit -- a much appreciated feature in itself.

For my test, I took a picture of some Nasturtiums. I then processed the Raw file in-camera, followed by uploading the newly created Jpeg to Flickr. Here's what the image looks like right out of the camera without any further processing. What a great team! In-camera Raw processing, built-in Eye-Fi menus, and the Eye-Fi card itself. No computers required.

If you want to know more about the Eye-Fi card, including how to set it up using Eye-Fi software, visit the Eye-Fi web site.

Somewhere along the line you must have told the Eye-Fi card how to login to your Flickr account, am I correct? I have the same card, but I though it had to go through the Eye-Fi software on a computer and from there to Flickr. How do you handle the authentication? I must be missing something.

Hi Doug, The Eye-Fi card had been set up for some time. And yes, you use the Eye-Fi software to do that. I've been using that particular card for some months now.

This isn't an article about the entire Eye-Fi procedure from soup to nuts, rather showing that many new cameras have built-in Eye-Fi menus to make management easier.

Doug, you are correct. When you set up your Eye-Fi card, you tell it where you want the photos to go. To your computer and online site.