While shooting in a high school gym this weekend, I noticed an odd color shift appearing in some of my images recorded in burst mode with the Canon 60D. Even though the gym lighting was consistent, this image inconsistency happened on a number of occasions. 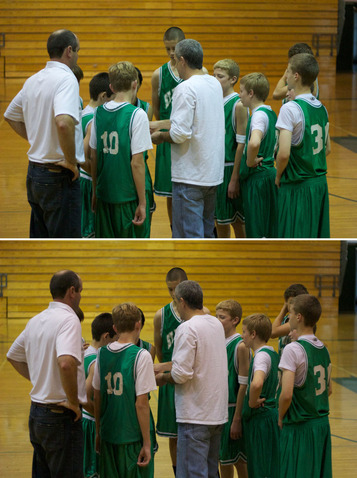 Side-by-side frames recorded in burst mode on a Canon 60D. Click on image for larger version.

Here's how I had the camera configured:

The two frames shown here were sequentially recorded in high speed burst mode. I opened up the Raw files in Canon Digital Photo Professional, Aperture 3, Photoshop CS5, and Lightroom 3. The images had the same color differences in each application.

What's even stranger, it looks as though the camera optimized the shadows and highlights in the top image, but not the other. I scoured the EXIF data in DPP, and found no differences between the two shots.

I don't have an explanation for this, but wanted to pass it along to Canon shooters.

Could it be the lights in the gym? All fluorescent lights have a specific frequency and don't produce a consistent output. Just guessing here.

I know that fluorescent lights are all over the map in terms of output, but what I'm seeing in these shots is quite a difference. Plus, look at how the shadow areas are different in the two shots. That seems to be caused by the camera.

On twitter, Stu Maschwitz replied to me that he's heard that this issue is caused when the sensor heats up. I don't know anything about that. But my bursts were relatively short on this shoot.

How about this theory? The gym lights are blinking at twice per 60 Hz power line cycle (strobing on and off every 1/120 of a second). Obviously, regardless of the light type (fluorescent, mercury vapor, etc.) they don't go DARK in the off cycle; it takes some time for the charged gas to emit all of its light. (They DO flicker, you can see it in certain high speed motion scenarios).

Nevertheless, you are shooting at 1/1600 so only capturing light for a very small portion of any 1/120th second cycle. You might think the all of the lights' strobing would be synchronized but, of course, the length of wire to each lamp is different and each lamp has different discharge characteristics. Add to that that no two lamps have exactly the same color temperature (especially since in gyms I have been in they sometimes have a mix of lamp types). So for any given shot, the various lights might be at different brightness, and depending on the mix of colors could cause the (apparent) white balance shift.

This might also explain the changes in highlights and shadows since changes in lamp output in front of/behind the subject would impose *real* changes in the actual shadows.

Or, it could just be a 60D firmware problem. :-) The real test would be to recreate this in sunlight (thus disproving my lighting flicker theory).

So I tried to recreate the issue in outdoor light. So far, I can't. Which lends more credence to the "blinking light" theory.

For the moment, that's the way I'm leaning.

I've experienced this exact problem with sodium vapor lights, which are common in school gyms. Here's a discussion I googled up for you:

Steve, thanks for the info. Very helpful indeed.

Now that I have a better understanding of what is going on, I think I'll continue to shoot the way I have been and color correct in post as needed. Limiting my shutter speeds to 1/60 or 1/120 isn't a very good alternative for shooting sports.

As always, members of the TDS virtual camera club rock!

I was going to say the same thing as RLH. Have had this issue in gyms for years with a 40D and mist recently with a 5Dmkii

Just to let you know.. its certainly not a Canon thing. Sports shooters have to deal with it in nearly every gym that is lit with the vapor lights. Sodium, mercury whatever the metal, these lights cycle at 60 hz with the power. As they go through the cycle, they color shift from pink to green. The older the lights, the worse the cycling in my opinion. This is the main reason so many of the pro sports guys strobe basketball when they have access to the latest Canon or Nikon gear that can take pictures in near darkness.

It's not you or your camera, its the lights.

The LUMIX DMC-GH2 as the latest member of the New Generation System Camera LUMIX G Micro System.DMC-GH2 can record high-resolution full-HD 1920 x 1080 movies in astonishing smooth 60i, doubling the sensor output from 24p to 60p. http://quicktimeripper.com/

All that lighting variations are not the case here. I have a 60D too and same thing happens every one in a while when i shoot burst and even in manual mode where settings for each image are consistent. I've noticed different white balances in a couple of pictures shot during burst. I'd say that's something with the camera itself because I shoot a lot of paintball pictures in the outdoors so the sun lighting is constant during that time frame.