I have a small collection of VHS tapes that contain some terrific content. My favorite of the bunch is American Photography, a Century of Images, which is a wonderful resource for students of the medium. I decided to digitize these tapes and put them on my iPhone and iPad so I could watch them whenever I wished. The process is quite simple. All you need is an affordable digitizer, a computer, and a VHS player. 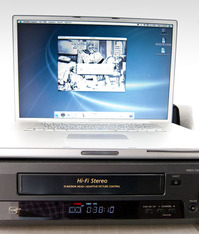 Here's an old 1.33 GHz PowerPC G4 being used to digitize VHS tapes for my iPhone. Click on image for larger version.

I spent very little money on this project. I dusted off an old PowerPC 1.33 GHz laptop running Tiger that wasn't being used, and connected it to a Sony VHS player using an iGrabber that I bought on sale on Meritline for $21 (normally $36). That was the sum total of my investment.

Basically, I fired up the digitizer, started playing the video, and saved it to my computer as a QuickTime movie in standard definition (640x480). I then added the movie to my iTunes library, including information about the production that I copied off the VHS dust sleeve.

At this point, I can watch the digitized tape on my computer. It plays fine. But if I use a CODEC during the digitizing process that the iPhone doesn't like, such as PhotoJPEG, then I have to have iTunes convert the file to MPEG-4 to make it compatible with my iOS device. To do so, I clicked on the movie, then selected Advanced > Create iPod or iPhone Version. iTunes created a second version of the movie that can now be viewed on a mobile device.

For some reason, the Mac version of the software that was on my iGrabber DVD was corrupt. Fortunately, I could use the serial number on the envelope and download a good version of the driver from the MyGica site. Once I did that, everything worked great.

I initially tried using H264 as the recording CODEC as I was digitizing the content, but my older G4 just couldn't handle the load and I had sync problems. So I captured using the PhotoJPEG CODEC, then converted the file for iPhone playback in iTunes on an Intel Mac. It's an extra step, but I like being able to dedicate the old computer to this project. As for audio, I've been using "uncompressed." It doesn't add that much size to the file, and it really sounds good, both on the computer and my iPhone.

As we all know, VHS tapes don't last forever. So if you have a few cherished recordings that you would like to save, then this setup will probably serve you well.

Thanks for the tip! I just ran across some old VHS tapes while cleaning a closet the other day and added "Digitizing" to my To Do list for the new year.

Now that I know the cheap solution to interface with my Mac (though the $21 sale is over), the trickiest part of the process now is finding a decent VHS player...

Maybe you can borrow a VHS player since you won't be needing it long term. The digitizer works for all sorts of A/V devices.

I just had my old VCR cleaned and it's ready to go. I looked at these iGrabbers on Amazon and the reviews aren't all as positive as yours. I think it would be worth gambling on Amazon's $38 price though, as I expect I could return it if I wasn't happy with it. I've not done video capture before and am wondering if all captures result in huge files, regardless of hardware used for the process. What was your experience with the file sizes? Audio problems? Encoding issues I should be aware of?

If this doesn't work, I guess I'll bite the bullet and get the Elgato. Although not all the Amazon reviews are glowing for that product either.