ISO 3200 at Oracle Arena for a Warriors Win

The ability to push the ISO up to 3200 for indoor sports makes everything easier. I can stop down the aperture a bit to give me more depth of field, and still maintain a fast shutter speed to freeze the action. 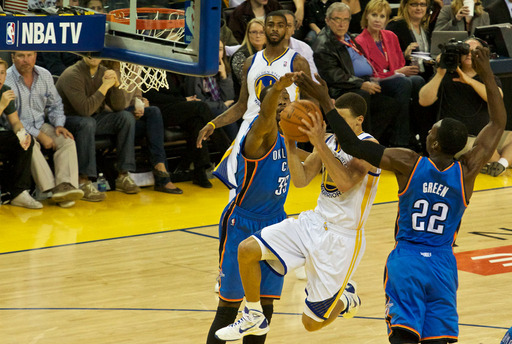 Warriors point guard Stephen Curry splits the defense of Durant and Green to score during the Warriors victory over Oklahoma City at Oracle Arena on Feb. 13, 2011. Click on image for larger version. 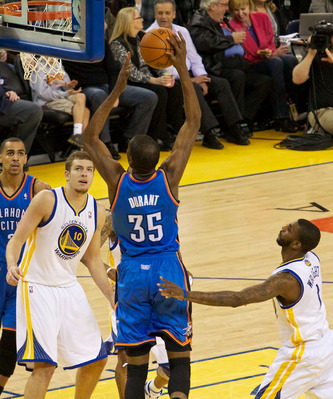 Kevin Durant dunks against the Warriors at Oracle Arena. Click on image for larger version.

Being able to use the f/4 telephoto instead of the bulkier f/2.8 70-200mm makes everything easier for this type of sports photography because it is lighter and smaller. Then, to get the most out of the images, I capture in Raw, even though the memory buffer fills up a bit faster on the 60D when I do.

I was using a similar combination (Canon T2i w/70-200mm F/4 IS) to photograph high school football in Ventura, CA the end of last year. The games were all after sunset so they were only lit by stadium lights. ISO 3200 was required.

I tried to shoot JPEG to get faster frame-rates on the T2i. What I quickly learned is that with high ISO, the frame buffer dropped from around 8 or 9 shots to only 3 or 4 in high quality JPEG mode. The first time it happened I thought my camera was faulty. Then I finally realized what was happening. I had to switch to RAW which actually allowed more continuous shots. I suspect the high ISO processing (including noise reduction) for JPEGs causes the files to get larger and the camera to slow down.

Did you notice something similar with the 60D? When I bought the T2i I was deciding between the 7D and T2i and didn't realize I would run into the speed limitation.

Thanks for writing this post....the timing is perfect because I have been trying to take photos at my nephews 5th grade basketball games. The lighting is always tough in middle school gyms. I used my 70-200 f4 on my 7d and had the ISO at 2500 and SS at 500. Your shots are great! What white balance did you use? How much post processing did you do to the photos.

Thanks for all of your great information,
Stephanie