I've used Canon flashes for a number of years, but none of them have delighted me like the new Speedlite 320EX 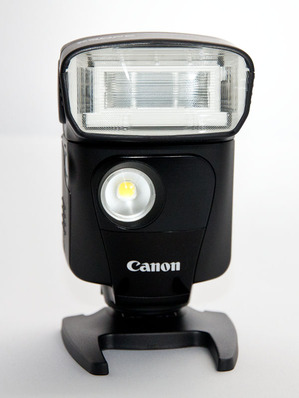 Canon 320EX. Notice the LED light in the body.

This 1.1 pound strobe fits easily in nearly any camera bag, yet includes: 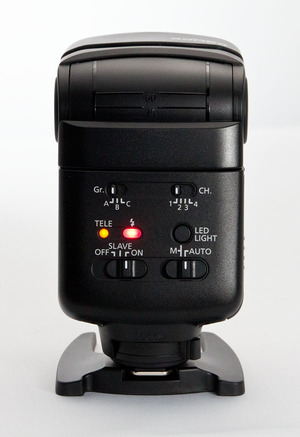 No LCD on this flash. Easy to operate buttons and switches instead.

I don't know if it was a conscious decision on Canon's behalf, or just that an LCD wouldn't fit in the limited real estate of the 320EX, but all of the controls are handled by buttons and switches on the flash itself, or via the menu on the camera. I love this!

If you're going to work wirelessly, then put the 320EX in Slave mode with the switch in the lower left. Most of the time you'll be working in Group A, Channel 1, but if you need to change those, then use the two switches above the On/Off. If you want to use the LED light, move from Auto to Manual with the switch in the lower right, then press the LED Light button. The remote trigger is a button on the side of the flash above the battery compartment. If you want to move the zoom head out to Tele position, just pull it. The TELE light on the back of the flash will illuminate to let you know. 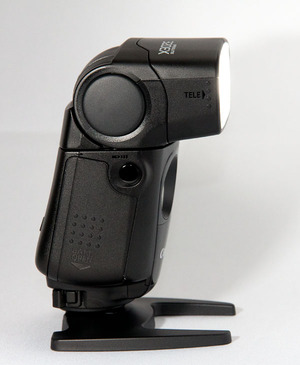 Remote flash trigger button is located above the battery compartment.

You can fire you camera remotely with the 320EX. Basically this works with any Canon that accepts the RC-1 remote controller, which is many of them. Set the camera to Self Timer in the Drive mode, then it's ready to accept commands from the 320EX. There's a 2-second delay that allows for last minute adjustments.

This is handy for off-camera flash work. You could use the LCD as a modeling light to position the 320EX just where you want it. Then use the remote trigger to take the shot. On the 60D or T3i, you could have the Vari-Angle LCD turned around so you can see the image from the remote position to decide if you need to make further adjustments. Slick! 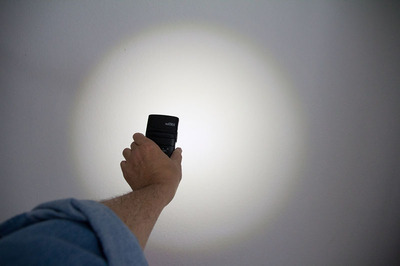 The LED throws a decent circle of light. The distance here is 28" from the wall. As I stepped back, the circle became larger, but not as bright.

The LED light is bright enough for work within 8 feet. When you're close to the subject, the diameter of the circle is tighter, as shown in the illustration above. As you move back the diameter grows larger. This addition fits perfectly with the direction our DSLRs are going. Now, while recording video and stills together, we have a flash that can accommodate both.

I think the Canon Speedlite 320EX might motivate photographers to consider off-camera flash and creative lighting more often. It's so compact that there isn't really an excuse not to bring it. Plus, it performs triple duty because it is a terrific hot shoe/wireless flash, includes an LED light for video and modeling, and serves as a remote trigger.

Highly recommended, especially for Canon 7D, 60D, and T3i users. Available for about $275

I know exactly what you're saying, Chris. I winced a bit when I paid for the 320EX. But now that I have it... I *really* like it. Will skip lunches to keep it ;)

The remote trigger function is cool, I think I might use it a lot.

Hi Chris, Thanks for the tip! Yes, the remote trigger is a nice touch, isn't it?

Great review, thank you! Quick question, I keep reading about how this flash can be used as a slave, can it be used as a master to trigger other flashes too?

Wonderful review, Derrick. I've just bought the Speedlite 580EX II but am thinking of grabbing the 320EX for use as a slave.

I've just purchased a 320EX here in Malaysia for $230USD and I love it! It's compact compared to my monster of a 580EX II and everything works out of the box!

It just occurred to me while reading your well written review - that you could have the LED light facing your white background to help illumine it - and - have the flash towards your subject. Double-duty! I can use both my 320EX's to do this, and wirelessly...

hi! i just bought a canon 320 ex and a set of kodak rechargeable batteries and it fires and all but my photos come out black all the timeâ€¦. any suggestions? A my doing something wrong? (canon 7d)