Pogoplug for iPad Provides Access to Your Personal Cloud

One of the first questions I fielded when I published the article, Personal Cloud Storage for Photographers, was, "Can I access the contents of the Buffalo Cloudstor from my iPad?" Thanks to Buffalo's partnership with Pogoplug, you can. They have free iOS apps for the iPad, iPhone, and iPod Touch. 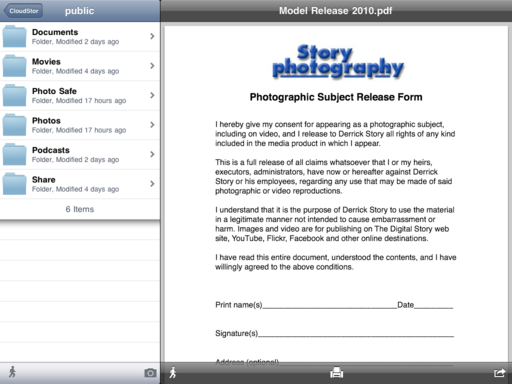 The Pogoplug iPad and iPhone app makes it easy to see the contents on my Buffalo Cloudstor personal server that's back at the studio. Click on image to enlarge.

There is good news and bad with this app. The good is that it provides easy access via my iPad to the Cloudstor data. I could be anywhere in the world, and as long as I have an Internet connection, I can see my stuff. The interface is well organized and clean. And for document viewing, such as this PDF of my model release, it looks great.

Not So Good for Photographers

But photos suffer a different fate. For some reason, Jpegs that I upload to the Cloudstor are sampled-down when served-up through the iOS apps. For example, a 2048x1362 Jpeg appears as a 640x425 image on my iPad, and it doesn't look good at all. The original photo is intact on the Cloudstor at its higher resolution. This sampling down seems to be the function of the iOS app. For the life of me, I could not find a setting to fix that problem.

Raw files weren't easy to deal with either. Again, they are there on my Cloudstor server and listed in the Pogoplug app. I can download the files to the iPad, but once they are there, Pogoplug gives me an option of opening the file in a different application. The handoff did not work with Photogene. But I was successful with Filterstorm. I could edit the Raw file I downloaded from the Buffalo Cloudstor, then save it to my photo library on the iPad. The problem is, you don't have any previews in Photoplug. So you have to download the entire Raw file and open it in Filterstorm before you can see the image. The bright spot here is that I then had a 3121x2081 file to work with on the iPad.

The free Pogoplug app for iOS devices allows you to see all of the content on your Buffalo Cloudstor personal network server (or any computer that has the Pogoplug app loaded). It seems to handle documents well, such as PDFs, but isn't really calibrated for photographers. If your main goal is to use this combination as a remote photo server/viewer, then you'll probably be more frustrated than it's worth.

I appreciate the information. I was about to purchase a pogo drive and use it just for the purpose you've demonstrated to be more difficult than it's worth, so I've saved a little money. I'm still looking for a solution which may be helped with Apple's impending cloud service, but I'm not sure I'll enjoy the bandwidth needed when traveling to make that an option either.