For Whom Is the Nikon 1 Built? 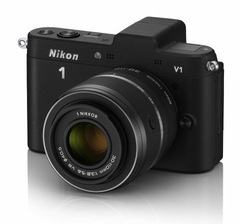 I've been thinking about the Nikon 1 and trying to figure out why there isn't an APS-C sensor in that handsome body. Instead, as you probably know by now, Nikon designed a 1" sensor that's smaller than micro 4/3, but bigger than a compact. Some speculate that they did this to protect their DSLR business. Really?

I guess Sony didn't get that memo when they designed the NEX series, which features a 1.5X APS-C sized 14.2 MP CMOS sensor. Nor did Olympus when they put the same sized sensor in their PEN series as they have in their DSLRs. Both companies, along with Panasonic and Samsung, might be feeling like they've dodged a bullet.

So, for whom is the Nikon 1 built? I doubt that they will lure away any NEX shooters. Olympus might be vulnerable up the road if they don't update their technology. Those who already love Nikon are most likely to embrace this system. Canon is going to announce something big in November, so its brand loyalists will probably sit tight for the moment.

Here's the thing from my point of view... if I'm coming to the game this late, then I would want to pull out all of the stops and leverage as much fantastic Nikon technology as possible to go after Sony. In my mind, the Nikon 1 doesn't do that. It feels like a camera designed by committee. And I really don't know who it's for.

Interesting comments Derrick. I realy think Nikon is seeking out a new market and for many people, a Nikon 1 camera may be ideal. As a self proclaimed tech junkie, I think sometimes we get too carried away with sensor size, resolution, etc. Most people just want to take pictures of their friends and families, and as long as it is easy and the photos look good to them, I realy don't think they care about sensor size or specifications.

Many people are scarred away from DSLRs and a lot of people are content with their camera phones. I really think Nikon was aiming at an audience who wants a "camera that takes good pictures" but not a "big" DSLR. Something that's better than a point and shoot or camera phone. Make that camera small, stylish, easy to use, and able to shoot video, and you may have a hit. I guess the market will decide. Personally, I don't see professionals/photo enthusiasts standing in line for it, but I don't think we are the intended audience.

Hi Sam, you may be right about that. But then I wonder, why would those casual shooters choose a Nikon 1 over a Sony, Olympus, or Panasonic?

I think Nikon went for the 1" sensor for a couple reasons. First, Asian countries, and Japan and China in particular, are really big into mini. That's why Panasonic downsized the GF cameras and is the sole reason there's any buzz about the (mystifyingly ugly) Pentax Q. Us Westerners don't want to admit it, but the photography market isn't about us. Virtually all growth is in Asia, and camera manufacturers - especially Nikon which is almost a pure camera company - have to cater to Asian tastes first.

Second, I think they didn't want to do the same thing that everyone else is doing. I have to applaud them for that. I'd rather have real choice over variations on the same theme, like we have in the DSLR market (really, if you don't already have an investment in glass, Sony, Canon, NIkon, and Pentax systems are all fairly fungible). In mirrorless, we have the choice between a small bodies with big sensors and lenses (Sony NEX and Samsung NX), midsize-to-small bodies with midsize sensors and small-to-midsize lenses (Micro Four Thirds), small bodies with small lenses and sensors (NIkon 1), and tiny bodies with tiny lenses and sensors (Pentax Q).

I think it should be noted that the 1 appears to have some really great technology that, if it works as advertised, should have a very broad appeal. The rapid shooting modes are REALLY cool, as is the hybrid PDAF/CDAF and the 1080p30 video . That's really interesting tech that promises to offer real tangible benefits (and if I were Nikon, that's what I would market the camera on).

This leads me to who I think the camera is for: parents who want to be sure that they can get the shot of their kids. My brother's wife just gave birth last month; I can absolutely seeing the 1's features being really valuable to them. If they work, it means being sure that you'll be able to get the shot. It's hard for a camera to promise that. The 1 just may be able to do so. Also, the friendly shape is less imposing to little ones, and the 2.7x crop factor means practically every lens is an ultra zoom lens: great for sidelines at the soccer game (without the strange looks from strangers).

The 1 has one massive unfathomable negative, though. The more I think about it, the more I think marketing messed up on pricing It's way too expensive. I can get a D3100 for about $530 and a D5100 for about $760. I can get a EPM-1 for $500, a NEX-5N for $700, and a GF3 for $670. I don't see how Nikon can justify $650 for the J1 and $900 for the V1. The value proposition just doesn't exist. Even if the camera has better image quality than any of the Micro Four Thirds cameras (the lack of advancement in Micro Four Thirds sensors has been disappointing and means that it's theoretically possible for the 1's smaller sensor to have better noise performance), it's a tough sell.

Lots of good points there, Rohith. And of course time will tell if any of us know what we're talking about :) One of the most important ideas you mentioned, which is: a camera with a "serious enthusiast" price tag needs to live up to the investment. There's technology to "get the shot," such as burst mode and AF speed - the Nikon 1 has that. But the shot itself is still the most important thing. And with the hefty investment in lenses and body for this system, I'm not sold that "the shot" (resolution, noise, dynamic range) is worth the price tag.

Love your point about the Asian market, btw!

5 megapixel is good enough resolution with 5MB JPG size and 7MB RAW.
anything above 10 megapixel is overkill.
I rather get faster, cheaper lens, image stabilization, gps.
It is for the ipad user who doesn't have a computer.
It is for those who don't like built-in compact camera.

It is for those that want speed, fast video.

I think the youtube videos tells the story best.
http://www.youtube.com/watch?v=gurU5UVnBuI

These camera can use any Nikon glass with an adapter. A 300 mm lens will become a 1620 mm lens. Hmmmm