When you're a photographer, spending time and money on your WiFi network is like having to buy tires for the car. You need them, but there are so many other things you'd rather do with the resources. But when my 4-year-old AirPort network pooped out, I had no choice but to upgrade. Of course now that the project is finished, I'm loving it.

I began by adding a new Airport Extreme 802.11N

5th generation router. I have 3 networked drives connected to the 3 network ports on the back of the router. I discuss this setup in the article, Personal Cloud Storage for Photographers, and in the podcast, Create Your Own Cloud. I also have 3 WiFi printers on the network, plus the iHome iW1 Wireless AirPlay Speaker System and various computers and iOS devices.

The AirPort Extreme has dual band support, so the devices that use the 2.4GHz band (iPhone for example) and the computers that can use the 5GHz band (MacBook Air) can tap their respective bands at the same time. I usually have a number of devices on WiFi at any given moment, and after a month of testing, I have not experienced a bottleneck.

Some of the particulars that I enjoy with the AirPort Extreme 5th Gen include:

Bumps in the Road 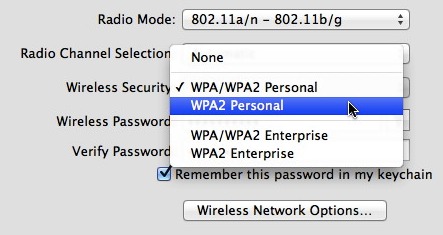 After I set up the new AirPort Extreme, my WiFi network seemed solid. That is, until I tried to log on with my PowerBook G4 1 GHz running Mac OS X Tiger. Yes, I still have a 2003 laptop on my studio network. And as a side note, I think this is one of the best PowerBooks Apple ever produced. To this day, it runs like a champ.

But, for some reason, it couldn't log on to my new network. I discovered that the problem was that I had set the AirPort Extreme to "WPA2 Personal" for security, instead of "WPA/WPA2 Personal." My old Tiger PowerBook doesn't support WPA2. So all I had to do, once I figured out the problem, was switch to "WPA/WPA2 Personal" and reboot the router. Everything worked great after that.

Even though I didn't want to spend the $179 for the new Airport Extreme 5th Gen,

I'm loving the features and performance. The Guest Network is a big plus, and having all of my network drives happy and accessible improves my workflow. Based on one month of testing, I can easily recommend this router for home or studio use.

You can further tweak your network by holding down option when clicking on radio modes in airport utility. This will give you the full list of radio combinations. I have mine set to 802.11n only (5GHz) 802.11n/b/g (2.4GHz)

I bought this unit a few months back and have been extremely happy. Great features, easy to manage, and excellent performance.

I know what you mean by the ole PowerBook G4, on of my grandkids are still using it. On the other hand my top of the line 2010, 15" MBPro has been nothing but trouble. New HD, new logic board and still randomly flaky.
Ed

thank you so much for this!!!!!!it used to show all the radio modes and then one day i switched radio mode to compare signals and then when i wanted to return to my first mode i could not see all the option.... it was driving me crazy...Thanks!!!