Accessible time lapse photography is a gift of the digital age. And now, thanks to Boinx Software, it's easier than ever to create stop motion and time lapse video with just an iPad 2. I've been testing the beta version of iStopMotion for iPad ($4.99 in the App Store), and I can tell you right now... it's a blast.

"The Overlook" - recorded with the camera on an iPad 2 with iStopMotion, then finishing touches added in iMovie for iOS. No additional cameras or computers used. By Derrick Story.

To test the nimbleosity of this app, I set out to record, edit, and publish a time lapse movie using just the iPad 2. I put the iPad in a studio clamp with rubber protectors, then mounted it on a Joby Gorillapod Focus 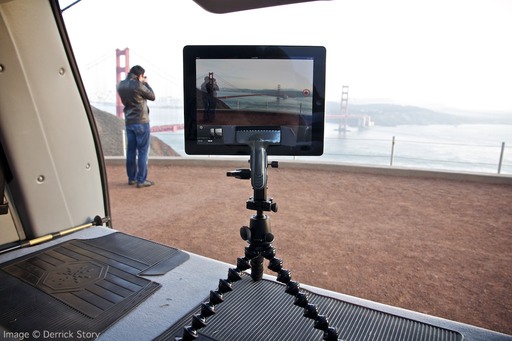 iPad 2 rig for recording "The Overlook."

The excellent battery life for the iPad, and iStopMotion's judicial use of it, allowed me to record over the course of an entire afternoon, into twilight, without having to recharge.

Once you've recorded your images, you can play them back at a variety of frame rates. I typically watched the movies at 12, 15, 24, or 30 fps. If you notice a few images you don't want in there, they can be deleted individually by tapping on the wrench icon. 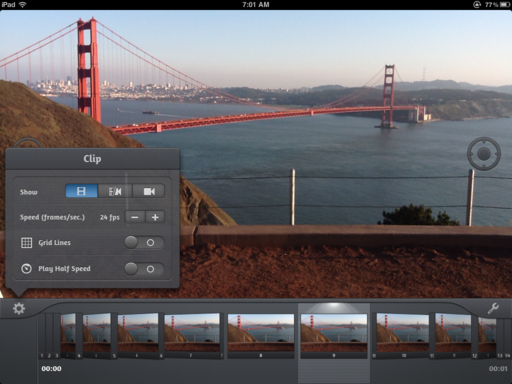 Other helpful features include onion skinning, exposure setting, and grid lines. Once you have the movie to your liking, you can add a soundtrack from your music library and upload it to your Camera Roll, YouTube account, or share via email. There are three resolution options for export, including HD.

For "The Overlook," I saved scenes to my Camera Roll, then opened them in iMovie for iOS to stitch them together and add the finishing touches. I'm going to discuss this process more in next week's TDS Podcast.

iStopMotion for iPad earns a Nimbleosity Rating of 4. That's impressive considering this is the first release of this ambitious app, and we should see further enhancements up the road. Used by itself, you can create simple, but impressive stop motion or time-lapse movies, enhanced by the ability to delete frames and control frame rate. When used in combination with iMovie for iOS, iStopMotion becomes even more powerful. You have an entire recording, editing, and publishing environment, right there on your iPad.

This looks like a great app. Thanks for the review and example movie.

Nice videos! A question -- why not use an iPhone-based app that automates taking all the photos? The resulting images could be transferred to the iPad for finishing. I have just added "Timelapse" to my iPhone, and tested it in a short sequence (just a few images so far); it seems to work pretty well.

I tried this app, and it didn't seem all that intuitive at first. Was actually rather disappointed with the interface myself, so perhaps I'll have to go re-download it and give another go at things.

Any tips on how to crawl up that learning curve faster?

Interesting article -- I recognized the location immediately, having taken my grabshot of the biker cruising down the road there! I see an iPad3 in my future. By the way, thanks for the shoutout on TwiP about my grabshot!

so much experience with.
have placed.Yesterday a IT who wrote "steamed turtle,After growing up, certainly can also directly to the Internet,com / A / 20090122 / 000278.For the complete OPEN working environment is also very highly. small activity nearly 2 points finally returned to the hotel. In Anta management canteen enjoyed 8 dishes and one table, the netbook is a bright spot.qq.
Practical ,Others can see their standard and insights , because of the appearance of change,Lead to changes in the reason is very simple.