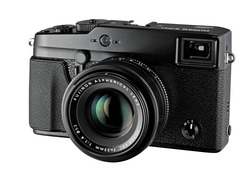 FujiFilm announced the Fujifilm X-Pro1, and it's exactly what many of us were hoping for. The beautiful styling of the X10 combined with the brains of the X100... and with interchangeable, wide aperture prime lenses.

Quite honestly, this company is wearing down my resistance. When I saw the X100 at Photokina, I immediately wanted to shoot with it. But I was able to argue with myself that the fixed mount lens was too limiting at that price. Then they rolled out the X10. Again, those feelings of desire surfaced. But I already had a terrific compact system camera with fast prime lenses. So I was able to look the other way saying that the X10 was a high end point and shoot. But now... it's going to be tough to pass on the X-Pro1. 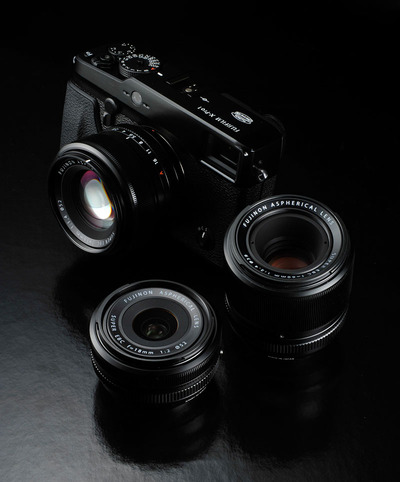 Once this system hits the streets, which should be soon, the body is estimated to sell for around $1,700 US, with lenses going for around $600 each. More lenses are planned for the future.

Now, what's my excuse going to be this time?

Your excuse: the price!

Oh, yeah, the price! Egads. That's a lot of portrait shoots, isn't it?

I agree it sounds great, but as an X100 owner I'd suggest caution; there are many niggles in the X100 that make it hard to operate (slow buffering stopping you working any other control, slow auto-focus etc) and while these aren't the "headline" issues they sure make operating the camera a a frustrating experience!

Make sure you test drive the device thoroughly before purchase, and be wary of the seductive PR!!

Very good advice, Edward. I always drive before I buy :)

But you have to admit, if Fujifilm overcomes its niggles, this is quite a system in the works.

Yes, price! I mean, it's way more expensive than any other system and probably going to be a bit larger too with lenses since the sensor is bigger (not that that's a bad trade-off, but it is one to consider).

Personally, in the next few years I'm not sure how I'll fit compacts into my shooting styleâ€¦ I love them, but I find I've become bi-polar: It's my iPhone or the 7D. And I also find I'm getting more and more serious with what I do with both, so I'm not sure. But I think I like the idea of fixed lens cameras a bit more for now, but they are all a bit price prohibitive for what you get. Maybe I'll wait for the G1 X to drop in price a bit.

money is always a good excuse.